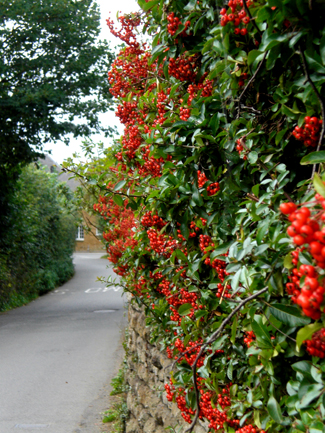 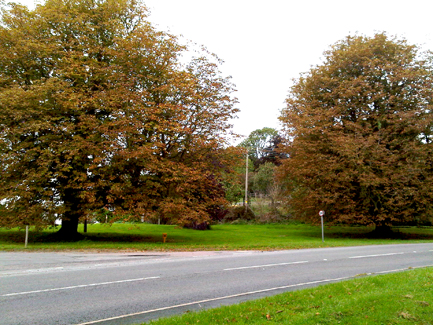 A month of mellow fruitfulness with the hedgerows full of berries, hips and haws, late colour in the gardens supplied by dahlias, Michaelmas daisies and chrysanthemums but the reds, golds and browns of autumn colour were gradually creeping into the tips of trees and shrubs to suggest the year was beginning to wane. 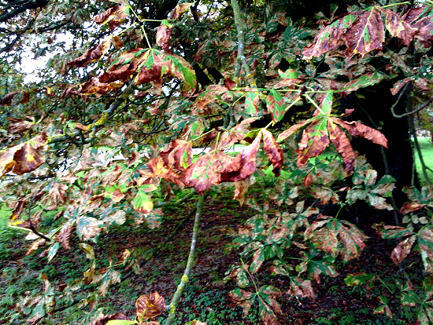 Sadly, most of the village’s horse chestnut trees were showing signs of the bleeding canker that is rapidly spreading through this lovely tree species. The leaves turned brown and crispy before their due time and the reduced crop of conkers fell almost unnoticed to the ground. The young boys who used to rush to collect the brown shiny fruits in order to put a string through them and play a game with friends to find the strongest conker seems to have disappeared. 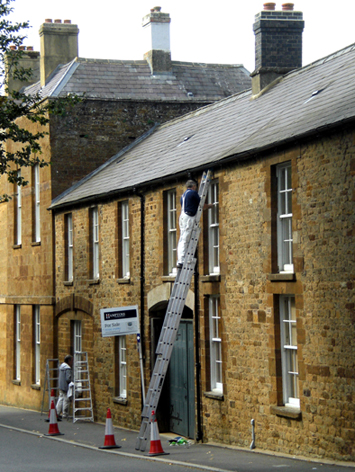 Although night temperatures were falling to lower levels, daytime temperatures reached a very welcome 20 degrees enabling some outdoor jobs to be completed before the winter. Painters in the Ferris were busy restoring the outdoor paintwork to some of the properties in the Old Manor. In the grounds of Sibford School the final thatching was underway to ‘top-out’ the Celtic house that had been constructed and completed during the summer months by some of the younger pupils. 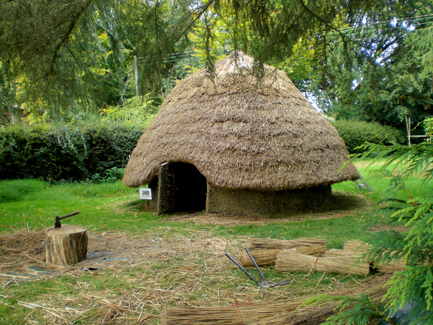 The practical experience of constructing the frame from tied strong branches and building the walls from wet mud had been messy and great fun. The authentic replica of this ancient style of house is used as an outdoor classroom for the children to experience, at firsthand, the materials and lifestyle of their forbears.

Both Parish Councils met separately early in the month and discussed the possibility of preparing a joint Parish Plan. This would incorporate the ideas and aspirations of villagers for the future of the Sibfords and Burdrop. Such a joint project was something of a first for the community as, in the past, the individuality of the separate villages had been carefully protected but the future of the Sibfords resides in the co-operation of the whole community to look forward – to preserve all that we hold dear and to accept new hopes and ideas. 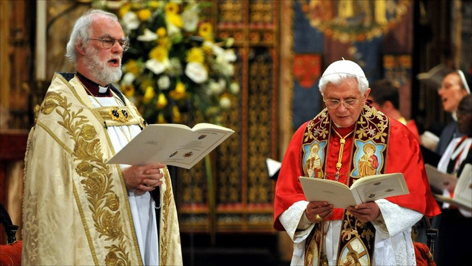 On the national stage Pope Benedict paid a State Visit to Britain and was welcomed by the Royal family and members of the diverse faith groups now active in Britain. The Conference season for the political parties also took place during September and the Labour party voted for Ed Miliband to lead their party after a four month campaign to replace Gordon Brown who resigned after the Labour party’s defeat in May 2010.

Most Clubs and Societies recommenced their programme of meetings following the summer break. The WI and the Horticultural Society both welcomed speakers to their meetings but attendance was reduced by villagers taking late holidays once the children had returned to school. The Friendship Club enjoyed their river trip from Upton on Severn, lunching on board on a warm and beautiful day. A celebration birthday party was held in the Village Hall to mark the 100th birthday of one of the Club’s members and Gower’s resident Mrs Beatrice Tanner. On leaving school she first came to the village from Woodford Halse to work at Sibford School and has lived in the village ever since. She celebrated her special birthday with her family, grandchildren, great grandchildren and friends.

The Oxfordshire Historic Churches annual Ride and Stride event took place when sponsored cyclists and walkers visited as many churches as possible during the day to raise funds for the Trust and their own local Church. Our own Church benefited from the efforts of villagers who took part and enjoyed visiting and being welcomed by other church communities. Two marriage services took place during the month and Holy Trinity was beautifully decorated on both occasions. The Church ran another sociable and successful coffee morning raising a further £171 for Church funds. By the time visitors were enjoying a cup of coffee, a chat and the chance to buy items from the sales table, the early morning frost, which had whitened the outlying fields, had long since melted in the low September sunshine.

The Sibfords’ Society welcomed back Liz Woolley to talk about Child Labour in Oxfordshire in the 19th century. She took us back to a period when very young children were expected to earn money to supplement any family income just to enable the family to survive in their impoverished circumstances. Small children were set tasks in factories and mines where their diminutive size made it possible for them to reach inaccessible place. They were employed as agricultural labourers, in domestic service, in cottage based industries, in quarry work in the brick and stone fields, as climbing boys in chimney sweeping, as errand boys and as newspaper sellers. Education was either non-existent or cast aside if there was a chance to earn a few pennies and it was not until 1870 that the Education Act made education compulsory for children under 10 and even this was waived during haymaking and harvest times.

The Village Hall committee ran the first of their new season of films – the 1961 Oscar winning film Breakfast at Tiffany’s. Sadly, it was very poorly attended (perhaps September is a month when many ‘seniors’ take a holiday break) but this District Council initiative to bring good films into the village communities will be lost if it is not better supported.

Sibford School welcomed Erika Mancini from the Wellcome Trust for Human Genetics, University of Oxford to the meeting of their Café Scientifique which was extended to include villageras. Her talk, entitled What’s in Your Genes? was illustrated by slides and cartoons and explained the nature of the genetic code which provides the unique information for each and every individual. Recent work has shown that a further epigenetic code ‘sits on top’ of the basic genetic code and this additional code is affected by the personal and individual choices made during our lifetime. The argument of ‘nature versus nurture’ should be replaced by nature WITH nurture. If the genetic code is the alphabet of life, the epigenetic code is the grammar of life as it specifies how each genetic code can be read. We look forward to the next meeting to be held in March 2011 and realise how fortunate we are that such eminent speakers come to Sibford School and that we too can benefit from hearing about their interesting work and research.

During the month the harvest work was completed, the grain dried and stored and the countryside began to assume its brown mantle as ploughing began in earnest ready for replanting for another season. Apples and ripe plums made their way into fruit crumbles, jams and chutneys while the central heating thermostats were adjusted on one or two colder evenings! Appointments were made with the chimney sweep to ensure that all was well for the open fires and wood burning stoves which might eventually supplement the heating systems in some of our homes.