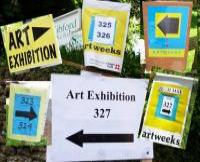 During the first few days of the month the nation was bombarded by political manifesto ideas and information from all the parties contesting seats at the General Election. The first Bank Holiday weekend was cold, chilled by a strong north easterly wind and gardeners needed to exhibit caution for their tender plants as night frosts were still forecast for the Sibfords. Although May morning was celebrated traditionally in Oxford there were no such celebrations in the village – the importance of May Day, a May Queen and her attendants, and flower decked garlands carried around the village with dancing had been lost in the 1970s.

Election Day, May 6th, dawned bright and sunny and the Village Hall served as the Polling Station for the whole of the Sibfords. Villagers kept the Polling Officers busy as they registered their votes for the National Parties and the local Sibford Ward for Cherwell District Council. Once the National results were announced it was clear that no one party had obtained the number of seats necessary to form a government so after five days of discussions the Conservative and Liberal Democrat parties agreed to form a true coalition government – the first for 60 years. This led to the resignation of the losing Prime Minister, Gordon Brown, so political change and reform was very much on the agenda for the remainder of 2010.

The cloud of volcanic dust continued to cause intermittent travel disruption while scientists and engineers carried out rapid research to confirm the tolerance levels to dust particles in modern jet engines. These studies allowed an increase in the number of permitted flights allowing aircraft to fly through less dense areas of volcanic ash as the meteorological experts carefully traced the course of the wind affected plume roaming over northern Europe. Together with regular strikes by British Airways cabin crew staff the airline industry was experiencing very troubled times.

Life in the villages continued normally for many and the organisations met and carried on with their business. The Friendship Club held its AGM and elected officers for the coming year. The WI held its Resolution Meeting and supported the mandate that ‘All foods should be clearly labelled with the country of origin’. The Horticultural Society enjoyed an entertaining talk entitled Digging Deeper discovering all about soil and also held a successful Plant Sale raising £300 to help with costs for the Flower Show in August. The Sibfords Society revisited the Roaring Twenties with a lecture on the pain and extravagant lifestyles emerging in the country at the end of the First World War; political reform and technological advancement surged ahead while 25% of all land in the country changed hands between 1918 and 1921.

House-to-house collections were made for several different charities during the month, including Christian Aid. An ecumenical service was held to launch the collection for this charity – the first to be carried out in the village for many years. 22 villagers helped with the collection which raised over £1250 to help towards the Charity’s aim of reducing poverty throughout the world. £134.77 was also raised at the second of the year’s coffee mornings in Sibford Church to help with church expenses.

During Oxfordshire Art Weeks 2010 some 20 artists and craftsmen showcased their work in seven different locations within the Sibfords. The project was well supported in the north of the county with other nearby villages also hosting exhibitions of work from many talented contributors. The scheme provides an excellent opportunity for local people to share and celebrate their work within their local community.

Both the Gower and Ferris Parish Councils held their Annual Parish Meetings during the month to review their work for the previous year together with taking reports from the Town Estates Charity (and for the management of Wheathills Field), the Village Hall, CDC for the newly introduced Food Waste recycling programme and OCC Highways for the state of village footpaths and highways. Villagers also had an opportunity to raise any issues of interest or concern with their parish councillors.

The cricket season got underway with both the League and Sunday teams enjoying some success although the early games were played with jumpers and fleeces at the ready. Home games are played on the main cricket pitch at Sibford School and there is no better place to spend a warm summer afternoon – support is always welcomed. The Indian Runner drake on Sibford Gower village pond was far less welcoming – he had become very aggressive to villagers as he exhibited protective behaviour during the breeding season. It is hoped that this will soon settle down as village mothers and children are very apprehensive about walking in the area around the pond at the moment. A full report and his picture even appeared in the local Banbury Guardian newspaper!

The village shop remained open for business as a refurbishment ready for a change to a Londis franchise was undertaken. Collection boxes for Householder’s Surveys will remain in the shop, surgery and primary school for a little longer in the hope of increasing the response above 40%. Early analysis of the data returned to date is giving an interesting picture of the life and work of villagers in 2010. The final piece of work is to record the activities during one specific day – 16 June has been nominated as ‘Domesday 2010’ and the proforma was delivered at the end of May with the current issue of the Sibford Scene.

The final weekend – the second Bank Holiday weekend during the month was warmer and it was possible for hardy souls to cook and eat out of doors. Garden plants made significant growth and perhaps we can hope that the first five frost-affected months of 2010 are behind us. Despite the final hot spell, May 2010 was the coldest on record since 1996.

The Icelandic volcano stopped erupting so travel (apart from strike-affected British Airways) returned to normal in time for half term holidays abroad to be enjoyed.