The weather forecasting agencies tell us that it is not unusual to experience wintry conditions during October and October 2010 was no exception. Arctic winds arrived during the middle of the month reducing overnight temperatures to below zero. The resultant ground and air frost struck some of the tender summer plants and officially proclaimed the arrival of winter. However, the beginning of the month was more notable for the prolonged and heavy rainfall. Some of the Sibfords’ Scout troop attended a weekend camp at the County Camp site at Youlbury near Oxford and the wet conditions were challenging. 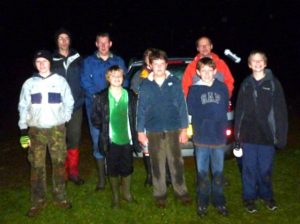 The rest of the troop met at the District camp site at Horley and enjoyed a series of wide games. Challenging their Dads the boys enjoyed the sticky conditions on a dark, wet evening but honours were even and hot chocolate was welcome before returning home.

The golf Ryder Cup was held at Celtic Park in Wales during the same weekend and overall 13 hours of play were lost due to rain. For the first time in 83 years the tournament ran to a fourth day and the result of the competition rested on the final game on the final day. Europe narrowly held off a final American challenge to win by a single point.The Friendship Club met twice during the month and for their second meeting travelled to Inkbarrow 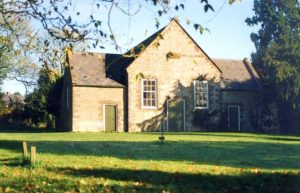 where members enjoyed a carvery lunch.

The Society of Friends hosted a very successful Fair Trade tea party to mark National Quaker Week in the recently refurbished Meeting House. This now also has a special children’s room plus a shower and toilet facility for disabled people. By arrangement, they are very happy for the village community to make use of these new facilities if they have visitors staying who would benefit from this specialised facility. The WI welcomed a speaker who gave a talk on The Mary Rose and the competition for this meeting was for a Naval Memento. The Horticultural Society held its AGM and this was followed by a talk on pruning and caring for apple trees. At the monthly meeting of the Sibfords’ Society the talk was entitled The Lost Villages of Oxfordshire and it was interesting to hear about the number of settlements that have shifted, been deserted or disappeared since the Domesday Record. A summary of results for the Domesday Householder’s survey were posted on the website.

The Village Hall committee hosted another Film Night when an appreciative audience enjoyed the tender drama of the early years of Queen Victoria’s reign –the film was entitled The Young Victoria.

The Town Estate Charity trustees met for their second meeting of the year to deal with matters concerning the administration of the estate. The Trustees were able to agree to make a donation to the repair of the Holy Trinity Churchyard north wall, to donate the outstanding amount on the Adventure playground at the Primary School and to pay for and erect a seat by the bus stop in Main Street in the Gower. The Charity has managed the Town Estate since the mid 16th century and due to the careful stewardship by Trustees throughout almost five centuries the communities of Sibford Gower and Burdrop are still able to benefit today. 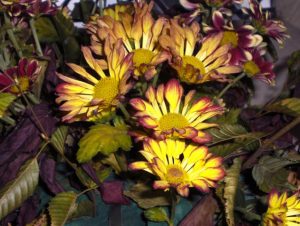 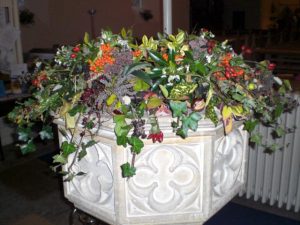 Work to damp-proof the church was undertaken to prevent further damage to the fabric of the building but greater fundraising effort is still required to meet the incurred costs. The safe gathering of the harvest was celebrated with a service of Thanksgiving. The Church was beautifully decorated with autumn flowers and produce including a giant mangelwurzel. Donated contributions of fruit, vegetables and produce were donated to Polly who produces meals daily for the homeless of Banbury. To continue to support this venture a Polly Box has been placed at the rear of the Church to receive on-going contributions to this worthwhile cause. Following the service a Bring and Share lunch was held in the Village Hall. This kind of lunch is always popular with villagers as everyone brings something along and it is all pooled resulting in a real variety of dishes and flavours.

Wednesday 20 October had been designated the day on which the Coalition Government announced the results of its Spending Review. The Chancellor of the Exchequer spent over an hour outlining all the various changes proposed to reduce the huge deficit of some £83b in the economy. These measures will surely impact in some way on us all – the rural economy is finely balanced and cuts to some services may be hard to accept. Oxfordshire Rural Community Council held its annual conference during the month and the main area of discussion focussed on ‘Rural Communities – thriving assets or expensive liabilities?’ It seems that the future success of life in the rural villages will require active community involvement and the proposed preparation of a Parish Plan for the Sibfords may well be very timely. 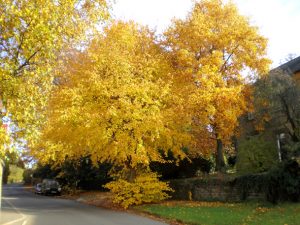 As the month drew to its close and the trees were bathed in their full autumn glory, the national interest was drawn to a plea from the airline industry for a relaxation of the security measures imposed on passengers following the terrorist attacks in the USA on 9/11. The debate was rapidly silenced by the discovery of hidden, explosive devices found on airliners in the UK and Dubai – the threat from al-Qaeda terrorists in the Middle East was as real as ever and the heightened security procedures which irritate travellers may well be a small price to pay in an attempt to afford safe airline travel. While the international press covered these issues, the powers of darkness were abroad in the Sibfords on All Hallows E’en as children ‘Trick and Treated’ their friends and neighbours to celebrate Halloween. October 31st darkened early following the ending of British Summer Time for 2010 by putting the clocks back one hour on the previous night.