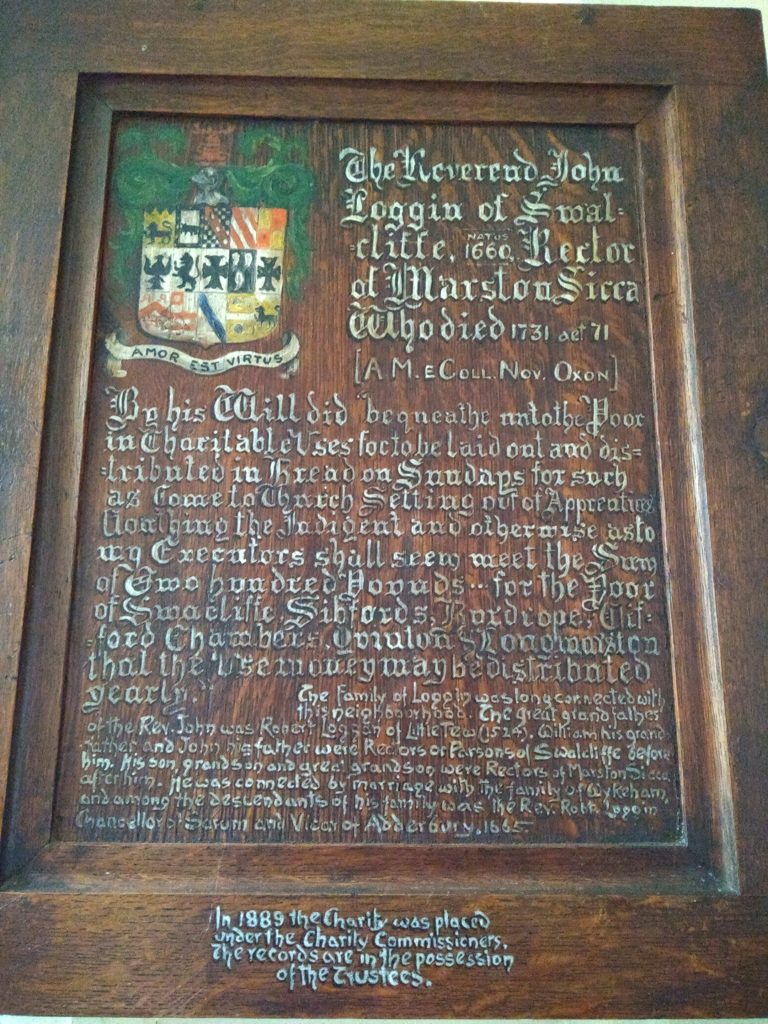 By his Will did bequeath unto the Poor in Charitable Uses for to be laid out and distributed in Bread on Sundays for such as Come to Church Setting out of Apprentices Cloathing the Indigent and otherwise as to my Executors shall seem meet the Sum of Two hundred Pounds … for the Poor of Swacliffe, Sibfords, Burdrope, Clifford Chambers, Quinton, Longmarston that the Use money may be distributed yearly.

The Family of Loggin was long connected with the neighbourhood. The great grandfather of the Rev. John was Robert Loggin of Little Tew (1524). William his grandfather and John his father were Rectots or Parsons of Swalcliffe before him. His son, grandson and great grandson were Rectors of Marston Sicca after him. He was connected by marriage with the family of Wykeham, and among the descendants of his family was the Rev. Robt. Loggin Chancellor of Sarum and Vicar of Adderbury, 1665.

In 1889 the Charity was placed under the Charity Commissioners. The records are in the possession of the Trustees.

The Charity owns 20 acres of land in Sibford Gower. The rents are distributed within the seven parishes each year by the current trustees, who make an annual appeal during the run up to Christmas for potential beneficiaries to come forward. To apply or to recommend a suitable recipient, please write to Mrs E Boughton, c/o Wyatts Close, Sibford Gower, Banbury, OX15 5RT.

The term Setting out of Apprentices is likely to do with the way apprenticeships worked at that time. They were essentially a legal contract between the master and the apprentice, who paid an initial free to be “indentured” to the master for a fixed period during which they lived with the master and were bound by a set of rules, “set out” in the terms of the indenture.