The final month of our ‘Domesday Year of 2010’ was again dominated by the weather – the coldest December for 100 years when records began and the coldest month for 30 years. The average temperature throughout the month was -1C. The sub-zero temperatures both by day and night meant that the small snow fall early in December lay in the village for some time. Those living in Scotland and the north of England who had received huge snowfalls were much more seriously affected. Schools were closed for more than a week and deliveries of all kinds were affected as traffic could not get to outlying areas. However, the skiing season in the Cairngorms got off to an early flying start!

Sibford School held its Christmas Fayre and pupils took part in their latest drama production ‘Hedda’ – a challenging production demanding a high level of skill and subtlety from the cast. The Church also held its annual Christmas Bazaar in the Village Hall on a chilly Saturday afternoon early in December. Fundraising continued with a Church coffee morning hosted by friends of the church family in Backside Lane in the Gower. The two events raised around £1000 to help to meet the Church’s financial commitments.

On 7th December, with thermometers recording -8 degrees Celsius, more than 80 villagers made their way to the Village Hall for a meeting to launch the Sibfords’ Parish Plan. Steered by local residents it is hoped that during the next year to eighteen months a community-led plan will be produced which will set out a vision of how we want our community to develop, identifying its needs and aspirations and to produce an Action Plan to achieve it. Encouraged by the high level of interest and with 27 villagers offering to help in different ways, it was decided to proceed and so 2011 will see the project under way. It is hoped that some of the Domesday Survey findings will be useful and feed into the planning for the future of our community so that what is value 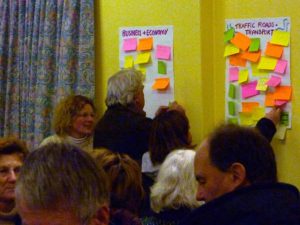 d can be retained whilst we can be sensitive to the needs of our increasing national population.

The Village Hall Film night featured a film called ‘The Elf’ and some 50 children and youngsters enjoyed a seasonal film in the Hall. Christmas Lunch was enjoyed by the members of the Friendship Club at Brailes Golf Club, but their Christmas Tea fell victim to the snowy and icy weather which prevailed in the final week before Christmas. The WI held their Christmas party on a cold and foggy afternoon enjoying a quiz, a Christmas tea and a Santa Gift exchange between members, finishing with some carol singing. Carols were sung in the Methodist Chapel on Sunday 12th, the Primary School held their

Carol Concert in the Church on 15th, and Sibford School also used Holy Trinity Church for their Christmas Concert on the 16th. Friday 17th provided a further musical celebration of Christmas with a Traditional Service of carols, lessons and additional musical items sung by the augmented Benefice Choir. At the end of the service mulled wine and mince pies were served in church which provided a social opportunity for those attending before they made their way home in the cold, icy conditions. Temperatures as low as -18C had been recorded by the weather station at RAF Benson – not so very far from the Sibfords in Oxfordshire. 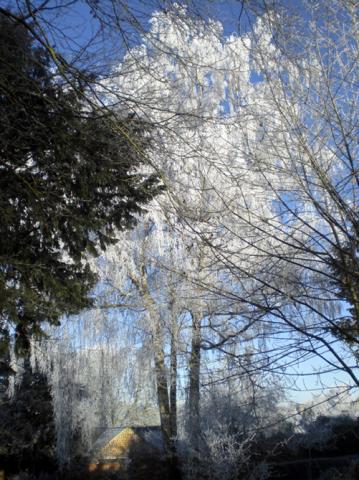 During this intensely cold period the village had donned a spectacular mantle of hoar frost – many of the trees were transformed into magical, crystalline structures sparkling in the frosty sunshine. However, early in the morning of the 18th, as forecast, the village received a significant snowfall throughout the whole day resulting in a blanket of some 8-10 inches of snow. Village roads were impassable and what should have been the heaviest shopping weekend prior to Christmas became another victim to the wintry conditions and a non-event. The Christingle Service was held on Sunday 19th with local children and their families able to walk to the Church. The Christmas story was re-enacted with some energetic galloping camels attending the three Kings being one of the highlights of the Nativity Play. Christingles were distributed to the children and the candles lit as a symbolic recognition of Christ as the light of the world and the collection was given to further the work of the Children’s Society. However, other services in the Benefice were cancelled due to the travel difficulties for both the clergy and congregations.

An extremely difficult week followed as ice transformed the snowy surface into a giant ice-rink leading to the cancellation of many planned activities for both individuals and groups. Accidents closed Motorways and major roads for periods of time preventing or delaying deliveries both retailers and the homes of those who had ordered their Christmas gifts ‘on line’. Our sturdy postmen provided a fantastic service walking and carrying mail on the treacherous village roads and lanes. Those who needed fuel deliveries were anxious as to whether suppliers would be able to deliver and the extremely low temperatures had increased daily usage at an alarming rate. Prices were rising on a daily basis as demand exceeded the ability to supply. The price of oil rose from around 49 pence per litre to around 70pence per litre – a staggering increase for a much-needed 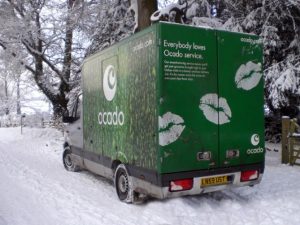 commodity. Once again the 4×4 vehicles came into their own and kind drivers collected prescriptions and essential provisions for those who were unable to leave their homes and cope with the very slippery conditions underfoot. An increasingly popular way of shopping is to order groceries ‘on line’ with one of the major supermarket chains. They ‘pick and pack’ the requested goods and for a small fee deliver orders to homes or offices. It was 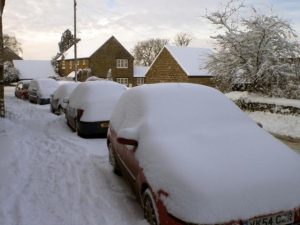 surprising to see these delivery vehicles in the village bringing Christmas goodies to homes when it was very difficult or impossible to negotiate the snowy, icy roads using ordinary family vehicles.

Cars, looking rather like igloos remained on the village street as their owners could not get to drive them out of the villages. Hook Norton and Chipping Norton were temporarily cut off until snow clearing equipment was able to clear tracks by stacking mountains of snow at the road edges and corners. These piles remained in situ until the New Year despite a thaw which set in a few days after Christmas Day. 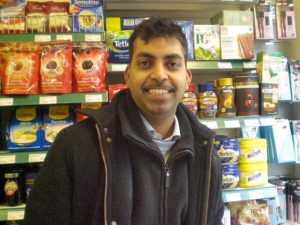 The Sibfords are blessed with our village shop and Ramesh and his staff provided essential supplies and a meeting point for villagers who had braved the slippery conditions. While families were enjoying the chance to sledge and toboggan on the 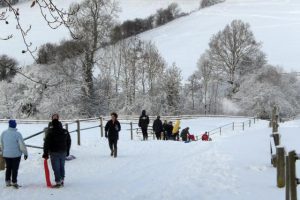 sloping village fields, toboggans had a secondary use as heavy supplies were pulled home. I met a couple who were collecting bags of coal from the shop and hauling it home across the valley to Burdrop to keep the home fire burning brightly over Christmas.

Some plans to travel away from the village were cancelled while others received guests early as they travelled whenever possible during the daylight hours. There was one further slight snow fall and the icy grip was not released until after Christmas but just over 100 people attended Holy Trinity on Christmas morning to share the celebration of Jesus’ birth. Sibford School was once again used as a residential centre by two groups of Buddhists from east London who enjoyed a winter retreat in peaceful and tranquil surroundings. They meditated and worshipped in the Oliver Studio which was transformed into a temple and elements of the diversity of our world were brought into our own locality in the Sibfords. Sadly, the Christmas Charity Football Match between Sibford Gentlemen and Swalcliffe Cottages planned for the Bank Holiday on Monday 27 had to be cancelled as the pitch was covered in snow and ice. So the local footballing giants were unable to determine seasonal supremacy for 2010 and their nominated charities could not benefit from the generosity of both players and spectators.  Boilers had been on overtime over the Christmas period and plumbers were much in demand once the thaw set in as pipes, which had been frozen and had fractured under the pressure of ice, started to release water into unwanted places!

The Queen’s New Years Honours list was announced on 31 December and 74% of the 997 recipients who received an honour were people recognised for the difference they had made in 2010 within their own local communities. Those in public service, academia, the arts and sport and heritage projects completed the list of recipients. As 2011 arrived, reviews of 2010 were published in the national press. During the year crime rates and the number of smokers had reduced. The number of teenage pregnancies had also fallen. Child mortality in many parts of sub-Saharan Africa had continued to fall dramatically (6% in one single year) and the emerging market economies continued to rise at a phenomenal rate.

Nationally, it was reported that 30% of British nationals suffer from some form of insomnia but only 6% require a full set of false teeth! 12,000 less people had come into Britain from the European Union and the number of people worrying about climate change had reduced from 44% to 22%. An unprecedented lack of liquidity had led to the Banking Crisis in 2010 resulting in the need for several major banks to be rescued. House prices had not shown any significant change during the year but were predicted to fall during 2011. 2011 will provide many challenges, especially as the global commodity prices for food and raw materials and fuel are already showing signs of high and significant increase at the close of 2010. Many of the world’s cereal crops had been adversely affected by climatic conditions – drought in Africa and America, floods of biblical proportions in Pakistan, Eastern Australia and Brazil. Forest fires had destroyed much of the cereal harvest in Russia which meant they would not sell into the global market. Despite the cold conditions in the UK during the early and late part of 2010 the year as a whole had been the warmest on record. 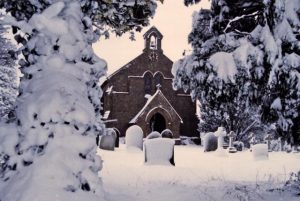 During 2010 two Baptisms and nine marriages had been celebrated in Holy Trinity Church but, although funeral, memorial and thanksgiving services had been held, there had been no burials in the churchyard – families preferring cremation for their loved ones. So, the newly prepared churchyard was not called into use during the year.

So, Sibfordians can reflect on another year in their long history and welcome 2011 with renewed hope that village life in our small corner of North Oxfordshire will continue peacefully with a caring commitment to all those who live or spend time in our village community. The continuing and rapid development of technological systems, the internet on the World Wide Web and all levels of communication ensure that we have instant access to whatever occurs in our world. This increases our responsibility at an individual and community level – a challenge which the current villagers of the Sibfords and Burdrop must accept for the well being of future generations, as all those who came before did for us.