During the Second World War the Agricultural Research Institute, in Oxford, 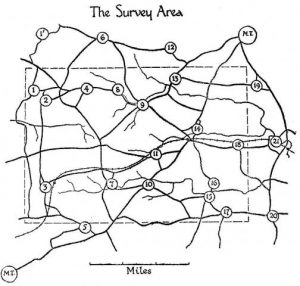 undertook a study into rural life. As their study they selected an area of north Oxfordshire which included Sibford Gower and Sibford Ferris. The area was selected for its comparative remoteness. Sibford Gower and Sibford Ferris are villages 1 and 2 in the map of the area, which was originally designed to be anonymous. Their report, Country Planning – A Study of Rural Problems, was published in 1944 and a film about its findings, 24 Square Miles, was later produced. The film is available on DVD but can also be viewed on the Hook Norton website.

The report identified that many of the farms were too small to remain economic in changing times, and that the standards of housing and welfare provision for the less well-off did not match those in more urban areas.

However, the most significant problem identified in the report was that of finance. If investment is made proportionate to the income from rates in an area, urban areas would always have the facilities and the villages would get nothing. The report concluded that a much higher level of state intervention would be required to eliminate this imbalance. In particular, it proposed regional water and electricity authorities so that the cost of provision could be spread out.

The report endorsed proposals for reform of local government. It was extremely critical of the situation as it then stood, citing Rural District Councillors who actively opposed proposals from the Parish Councils in the parishes they were elected to represent, over such basic needs as the provision of piped water supplies into houses. As, through their rates, the land-owning Rural District and County Councillors were likely to be the source of finances to the Councils if action were to be taken, the turkeys were not going to vote for Christmas.

The report appears to paint an awful picture of deprivation in rural areas for all but the land owners and professionals. However, on many occasions, it found it necessary to cite two medium-sized villages as being the exceptions. Sibford Gower and Sibford Ferris had a long-standing tradition of community involvement, with many facilities provided for all ages. The better-off villagers took it as their responsibility to provide education for the less well-off, and there were many active societies and associations.