The initial Launch Event was held in the Village Hall on Tuesday 7th December 2010. Despite the frosty night over 80 Sibfordians came to the event.

The two Parish Council Chairmen explained why the Councils chose to initiate the idea of a Community-Led Plan for the two villages. Then there was a Presentation about Community-Led Planning by Jo Ord of Oxfordshire Rural Communities Council (ORCC). It is an inclusive process that seeks to involve all of the Community and has three stages:

Experience shows that the first two stages normally take some 18 months to complete.

Such Plans are looked upon as an important input and evidence base for local authority planning. 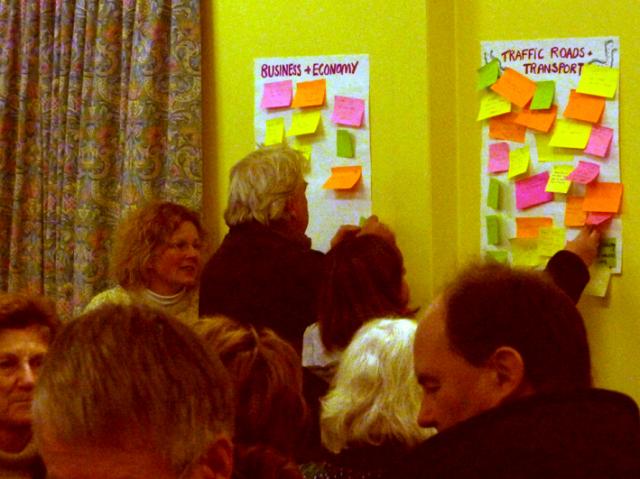 ORCC organised a simple on-the-spot exercise asking the participants what they liked and disliked about various aspects of the Community. This gave a ‘taster’ for the consultations which will form the Community–Led process of the future. There were several hundred responses which will be analysed and summarised.

Those present unanimously supported the proposal that the Sibfords proceed with the preparation of a Community-Led Plan.

Twenty seven people with a range of skills and commitment volunteered to work on the Plan – an excellent start for the project.

A Steering Group will be established to oversee the Community-Led Planning process.

Future news releases will keep you in touch with the Community Plan’s progress and will be posted on the Village website, thesibfords.org.uk. Initially, paper copies of this News Release will be hand delivered to all residents of the two villages by the volunteers. People who do not have www access to the village website will be asked to give their postal address to either of the contacts below, or to the deliverer of the News Release, so that paper copies can continue to be delivered to them.