This is a small plot of land surrounded by high hedges a little south of the T-junction of Hawkes Lane with Acre Ditch in Burdrop. Access to it is through a gap in the hedge on the east side that fringes the row of cottages that begins opposite Bank House and comes up from the T-junction.

In 2017, with the help of a grant from the Trust for Oxfordshire’s Environment, the Parish Council cleared the plot and turned it into a bird sanctuary and community orchard of half a dozen apple trees.

It was bequeathed to the Sibford Gower Parish Council by the late Miriam Tebbs. Miriam had an unlikely beginning, being born in 1920 on tiny Salt Spring Island, off Vancouver, where her father founded a company called Wood-Tebbs Co Ltd which was concerned with polymers in window making.

Miriam’s middle name came from her French-Argentinean grandmother Trinidad Conception Boutinon. Her mother Madeleine died just after giving birth to Miriam’s brother Loïc in France. The children were taken in by an aunt and uncle who lived near Coventry. Both children attended Sibford School.

After the end of the war, Miriam worked with the Quakers in refugee camps in Germany, trying to unite families/displaced persons. Later, she worked in the East End of London in baby homes, very concerned about the appalling conditions people were then living in in the slums. She bought Westside Cottage in Burdrop as a wreck and, over several years of weekends and little money, made it home. She continued to foster babies, some for a short time, others for longer. She was a skilled gardener and this was her main pleasure in her retirement. She lived a quiet, independent life until she died at the age of 80 from cancer. She is buried in the graveyard of the Friends’ Meeting House in Sibford Gower. 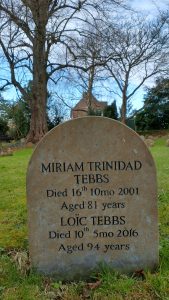