John Enock was a local Quaker who moved to Sibford Gower from Bow in London and married his sister-in-law Mary Harris who was a local girl. In the 1851 census his occupation is given as a timber merchant, but he appears to have become a significant local land owner, and to have built a number of houses in the area.

Sibford Gower was the subject of an Enclosure Act in 1773. Nationally, this had the effect of forcing many farm labourers off the land, as they could not afford the portion of the cost of putting the closure into effect, nor the cost of erecting fences around their piece of land, as they were obliged to do. Forced to sell their land for a pittance, and subject to stringent wage limits, many were forced to subsist on hand-outs from the parish. They could not move to find work because the Settlement Act meant that they would not be entitled to parish support in any other parish if they failed to find work. Draconian poaching laws were being introduced by the landowners, to prevent the poor from hunting their food.

In the early 1800s, an allotment movement was growing amongst the more liberal elements of society, although this was generally opposed by the landowners who had so greatly profited from the enclosures. This was not an allotment in the modern sense, but rather a sizeable allocation of land from which a farm labourer could hope to subsidise his income, and so not be dependent on the parish.

As a Quaker, John Enock may well have subscribed to the ideals of this movement, as his intention appears to have been to provide a number of smallholdings.

There is a group of dwellings recorded, at the head of the list, in the 1841 census for Sibford Gower, all occupied by farm labourers, but it cannot be certain whether these are Enock’s Colony as property names are not given. In the 1851 census, where the properties are listed by name for the first time, Enock’s Colony appears, again at the head of the list. The occupants were: 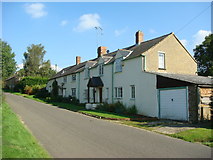