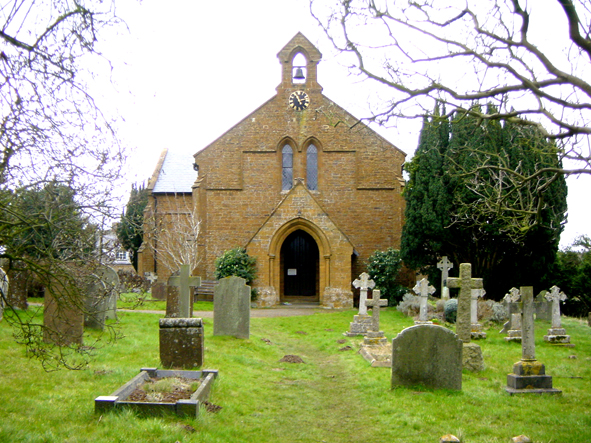 The King’s Commissioners visited the Sibfords in 1547 and reported ‘an ancient church which had fallen into decay’, but no site or remains have been found. Until 1840 the parishioners from the Domesday villages of Sibford Ferris and Sibford Gower were part of the ecclesiastical parish of Swalcliffe and all services, including burial, took place there and not in the Sibfords. The Sibfords are unusual for a village with a well-documented history not to have had their own church. This changed in 1839/40 when the current church was erected by grant and public subscription, providing 500 seating, 340 of which were free forever.

The church and graveyard receives many visitors during the course of a year, some of whom are seeking to find the final resting place of family members who are thought to have been buried in the village. The Quaker Meeting House, which can also be found in the village, has a full and accurate record of every burial in the Meeting House Graveyard but this was not the case at the Anglican Church of Holy Trinity. Members of the Sibfords’ Society felt it would be helpful to carry out a survey to record all the headstones in the graveyard and to produce an index of those buried in the churchyard whose headstones remained. Permission was sought from the Parochial Church Council and they were happy for us to carry out the survey providing we disturbed each stone as little as possible. 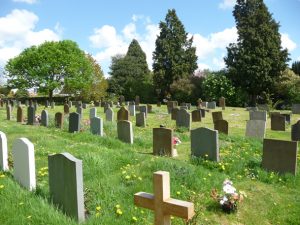 The original 1840 graveyard was extended in 1903, 1939 and again in 2009. We drew a ground plan of the 1840/1903 churchyard and divided the total area into a grid recording the location alphabetically and the rows numerically so each headstone had a unique reference number eg A7 or P30. The same was done for the 1939 extended area. This was always referred to as the ‘New’ Graveyard so each grid reference in this area was given an additional ’N’ in the location reference to denote it was in the ‘New’ area eg AN7 or PN30.  The Garden of Rest where ashes have been interred is to be found in this area and these were included. Due to the more recent nature of the burials in this area, local knowledge could often help where headstones were not present. These names were given a grid reference but names were typed in italic script to denote the absence of a headstone.

Over a period of several months members examined every headstone recording its shape, overall size, any inscription plus any other unusual features. Each gravestone had its own individual recording sheet bearing its unique number according to the grid and has been stored in our archive. It was often difficult to read the carved inscriptions due to the softness of the local Hornton stone although the oldest were only up to 175 years old. We used a soft brush and a puff of talcum powder to help to decipher the text and found that two pairs of eyes were often better than one.  The area south of the church, included the majority of the oldest graves and those surveying in this area often found themselves on their hands and knees or even fully extended on the ground to decipher parts of headstones which had sunk lower in the ground.

Once recording was complete an alphabetical index was created using a spreadsheet and each entry carried its grid reference. A copy of the final survey was printed, laminated and left in the church to be used by visitors. We have received feedback from some visitors who have been delighted to be able to locate their family member’s headstone easily without having to study the whole graveyard. Primary school pupils have also made use of our records in both their local and historical studies. Some of the inscriptions give great insight into the social history of the village in earlier times.

The survey may also be viewed on our Memorial Inscriptions page.