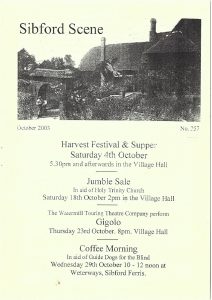 My medical advisers encourage me to walk each day and in doing so, I have been shocked to find the amount of litter thrown down.

So it is that We Sibford Womblers, which now comprises one fully armed member and one prospective member, has been born. There are a number in the Villages who regularly walk and may I encourage them to join this Association. All that is needed is a plastic bag and a Litter-picker, the latter can be obtained from Helping Hand Retail 01531 xxxxxx price for a 32 inch version £15.99 postage free. There is a discount for two or more so I suggest that anyone wishing to join the Association let me know their requirement and I will arrange the necessary quantity.

I know that there are a number of others in our villages who walk each day and previous letters in The Scene have drawn attention to the litter problem, I hope to hear from many new prospective members of The Sibford Womblers. The litterpicker is very light and most handy. I hope that we may remove this litter scourge from these villages for ever.

Alter nearly two years of negotiations, the Oxfordshire Blue Plaques Board has agreed that a plaque should be erected to commemorate the life and work of Frank Lascelles – “The man who staged the Empire”. The unveiling ceremony will take place at the Manor House in Sibford Gower, which Frank Lascelles built and lived in for much of his life.

Frank Lascelles was probably one of the Sibfords’ most famous sons, staging his pageants in Canada, India, South Africa and throughout the United Kingdom. He entertained friends such as Ivor Novello lavishly, and put on plays for the villagers in his gardens. He was passionately attached to Sibford and the beautiful house that he created. He was also a prominent member of the local community, serving on the Parish Council and the Town Estate Trustees.

The plaque has been funded by the Sibfords Millennium Pageant Committee under the auspices of the Sibford Gower Parish Council.

The ceremony will take place at 11.30am on Friday 24 October and will be attended by Hugo Brenner, Lord Lieutenant of Oxfordshire.

Everyone is welcome to attend.

In 2002. Sibford Gower Parish Council received a bequest under the terms of the will of the late Miriam Tebbs. She generously left to the Council the plot of land which is located to the front of the house in which she lived with the wish that it should be for the use and enjoyment of the residents of the village. Miriam Tebbs purposely had the land created into a sanctuary for wildlife and, consequently, it was overgrown to the extent that entry into the plot was quite impossible. Last year, the Parish Council arranged for the undergrowth to be cut back to ascertain the potential usage but already the land is once more very overgrown. Already situated on the land was a wooden bench and a plaque commemorating Miriam Tebbs’ bequest has been affixed to it. The Parish Council invites residents of the village to put forward suggestions and thoughts as what would best serve to fulfil Miriam Tebbs’ wish that the land should provide enjoyment. To this end, the Parish Councillors would welcome readers’ views and the Clerk to the Parish Council (Peter Hardman Tel: 780xxx) stands ready to receive them or the Councillors may be contacted direct.