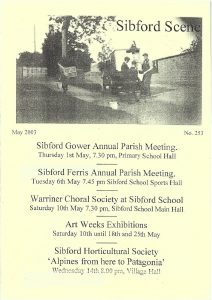 Everyone in Sibford Gower will know the three windows looking onto the High Street. opposite the Court House, always piled with dusty books. Those who penetrated the front door would find Reg Craig enthroned in his great ingle fireplace, unable to move far in recent years, but sparkling eyed and ready to talk on any issue, supporting his points with evidence from the piles of books and magazines to hand, a selection of which the visitor would be urged to take away, inwardly digest and come back with comments another day.

Reg Craig was a village ‘character’ who will be missed by all who came into contact with him. He was the youngest son of a large family in Wembley, where he remembered, at the age of 9, Frank Lascelles’ great Pageant of Empire. His father was a stage manager in London theatres and Reg could always be relied on to cap a Shakespearean quote. His interests were catholic, sustained not only by the books with which he was always surrounded but by the lively questioning of visitors on any promising subject, never excluding the latest village gossip.

As with many people of his age, the ‘big thing’ in Reg’s life was WW2. Reg joincd the RAF and trained at Bobbington (Staffs) as a navigator and bomb-aimer, the two roles being combined in the Wellingtons he flew. He was then sent on active service with 108 Squadron first to Malta (where he was present at the award to the island of the George Cross in September 1942) and then to Egypt for the desert campaign, during which he transferred to 37 Squadron.

In mid 1943 Reg returned to the UK to give instruction on bomb-aiming at Moreton-in-Marsh and later at Enstone, activity which earned him promotion first to Warrant officer and then to commissioned rank as a Fling Officer. Training in Wellingtons was, according to Moreton statistics, even more dangerous than operational sorties, a fact brought home to Sibfordians when a Wellington from Moreton crashed in the field opposite Little London cottage in the Ferris.

After the war Reg took up selling suiting material for a Saville Row tailor. The job took him frequently to Spain, especially Bilbao, where he learnt the language and maintained friendships into later life. Typically, he was able to produce two copies of George Borrow’s The Bible in Spain, a travel book of 1843, when someone raised the subject recently. He came to Sibford in 1966 and took jobs in financial services in Banbury and Stratford in between bouts in hospital for war-related injuries.

After the Moreton airfield became a training centre for the Fire Service, Reg took a close interest in the new Wellington Aviation museum, launched in 1990, supplying the curator with a lively flow of reminiscences, contacts and photographs.

For the last ten years, as his health declined, Reg set a wonderful example of cheerfulness in adversity. His humour and mischievousness never left him, assets which were pleasingly deployed to sustain the professionals and neighbours on whom he iincreasingly depended. He cared devotedly for his cat, also afflicted with age, and for a long time he sang the praises of the “heroic dog” next door, who was the only one to hear his cries for help when he fell in his garden and but for whom Reg would have spent the night outside.

Reg never married, although he talked fondly of his “near misses” (a typical Regism – he loved crosswords). He wanted no mourning and no funeral, and he left his body to science. Let us hope, nevertheless, that he will allow those who knew him to remember his life and record their affection in print.