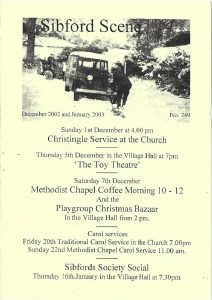 Oct. 27th This morning’s gale has done a lot of damage to trees. At the height of the gale at 10.10am the top blew out of our cedar. Many roads were blocked by fallen trees. My daughter in law tried three routes to Banbury from her home at Ratley and found them all blocked. Here the road across the hills was blocked for a short time by a sycamore that broke off well above the ground. A little further downstream a sizeable oak that grew in Sibford Gower now forms a bridge to Sibford Ferris. An old weeping ash which in its exposed position at Grounds Farm has withstood hundreds of gales was devastated and the fine oaks at the top end of Hill Bottom lost a good many branches.

Amazingly the temporary corrugated iron roof over Sibford Ferris Manor withstood it although much of the reinforced plastic screening round the sides of the scaffolding was torn away.

We had quite a powerful gale two years ago which uprooted the taller scots pine that stood on the bank at Wheathills. I think this one was stronger than either that one or the gale that we had when the famous hurricane crossed the south of England in 1987. The worst gale in my memory was the one that followed the severe winter of 1947 which blew down many trees particularly the elms which were plentiful at that time. If my memory serves me right there were nine trees down across the road (or was it roads) to Hook Norton which took some time to clear with the tools then available. I also remember the slates from our roof fluttering down into the cattle yard in the lee of the house.

Nov. 10th One or two people have commented on a smell in our garden as though something was dead but it was not until today that I came across the remains of two stinkhorn fungi which were no doubt its source.

Nov. 16th In the last 35 days I have measured 9.33 inches of rain which is more that a third of an average year’s rainfall. In contrast over the 32 days prior to this period l only recorded 0.09 of an inch.

Nov. 17th At 7 o‘clock this morning a robin was in full song apparently having no fear of the owls that were hooting nearby.

Nov. 19th After the rains of the last few weeks it was no surprise to see the floods out at Broughton today.

Not having seen any long tailed tits for a while it was nice to see a family working its way through the trees in our garden this morning. A wood pigeon hit one of our windows with quite a bump this morning which reminded me that last week I was told about a little owl that repeatedly flew up to a window from its perch on the balcony rail making the occupant think that it was attacking its own reflection. I once saw a grey wagtail that spent hours attacking its reflection in the mirrors of a parked car but this is the first time I have heard of an owl doing it.

A Request from Wheathills Farm

Over the past couple of years the number of firework displays has increased and now seem to happen at any time of the year. This is certainly not a complaint – we enjoy fireworks as much as anyone else (as long as they aren’t in the early hours of the morning!).

However, horses find the whole firework experience rather traumatic – there have been several incidents across the country in the last few weeks of horses being killed in their blind panic to escape (in one case two horses broke their necks in a head on collision with each other due to blind terror). We are lucky at Wheathills Farm in that our horses are generally quite calm – but we can’t take this for granted and usually stable them while any fireworks are going off. We also know to check the fields the following day for any debris (we have found four spent rockets this year).

Therefore, to help us plan ahead, l would really appreciate a quick call if you are planning any displays in either the Gower or Ferris so we can ensure the horses are secure.

With many thanks,
Tracey Warren

Concerns about fireworks were also expressed at Sibford Ferris Parish Council’s meeting held on November 11th. There are reports that dogs have also been traumatised by the random fireworks. It was discussed at the meeting whether we should contact the District Council in order to regulate the use of fireworks, e. g. Not after 9.30pm. We would like your views. Please Contact one of the Council members.