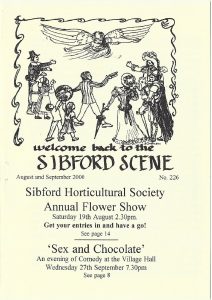 Like many Sibfordians I am shocked by the proposed renaming of the Wykham Arms. I feel it is an insult to all villagers and specially to women. If women did become moody in the past it could well have been because in bygone days many husbands, on payday, spent half their week’s wages or more in the pub, thus seriously depleting that which she needed for food for the family.

Now however if the term ‘moody cow’ is used simply as an unpleasant insult it is just as bad.

I wonder how men would react if the proposed name were, ‘The selfish s.d,’ or ‘The boozy b….r’!

I hope even at this late stage you will consider changing the proposed name to one more acceptable to all of us.

If however you are set on honouring our four footed friend who gives us milk, cream, butter and cheeses of great variety, why not substitute ‘contented’ for the offensive adjective ‘moody’.

As everyone is aware, The Wykham Arms has recently undergone major changes, and that isn’t referring to the name. James and Sarah Lloyd own The Moody Cow which is both a Limited Company and a Registered Trade Mark and have bought The Wykham Arms. They have made a huge investment in turning the run down, uncared for village local into a public house most villages would envy. Careful restoration, exposing original features and enhancing the newer ones has transformed The Wykham Arms to give the feeling of space combined with warmth and quality.

Karl Smith and Pippa Baston are running the business and are being supported by James and Sarah who also have The Moody Cow in Upton Bishop, near Ross-on-Wye in Herefordshire. Established in 1993 their philosophy is straight forward: Simple, fresh homemade food, presented well, in comfortable surroundings, served by obliging people at a sensible price. Everything is homemade, freshly prepared and cooked to order, from the soup at the beginning to the ice cream at the end. This combined with a selection of real ales, beers and wines has been the recipe for success and is now to be duplicated here.

As for the name …….. well, “The Moody Cow” will appear on signage in ‘conjunction with ‘The Wykham Arms” to make the visitors to Sibford Gower aware of who owns and runs this now charming village pub/restaurant.

The Moody Cow at The Wykham Arms will be open to the public from Thursday 3rd August.

How wonderful it is to live in a village whose inhabitants can be inspired to use their various talents in such a generously willing way as to produce the marvellous pageant that we’ve just enjoyed. One in which not only the people, children and grown-ups but also the horses, sheep, birds (and of course, the insects!), played their parts so magnificently. I was particularly intrigued to see the head of the Friends School undergo a temporary sex change to become George Fox! Copies of the programme, which is also an historical record of the Sibfords are, I believe, still available.

The exhibition of over 100 paintings, drawings and embroideries by village artists, whose ages ranged from 11 to 94, which were on dis- play at the same time in the Manor house, excited great interest and not a little amazement at the range of talent demonstrated by them. How good it was to find that a photographic record of these lovely panels, accompanied by carefully researched texts giving historical and geographical details, had been produced in book form in time to be on sale during and after the pageant. It is an amazing piece of work, a beautifully executed and carefully researched historical and pictorial record of this stupendous village achievement. I believe copies are still available – do get some for those relatives and friends who were unable to enjoy the pageant, I believe the panels are still on display.

The whole Sibford community is greatly indebted to David Ryall, who wrote the pageant and to the magnificent team of actors: men, women and children who performed in it or helped with the many other tasks.

Also to Mollie Pickett whose inspiration and enthusiasm got her team of embroiderers to produce such superb work: and lastly to Andrew, Martin and Julia Gordon, also Nigel Fletcher, for producing the lovely book of the panels.

Sibford on the web

The Sibford web site is principally devoted to the Pageant. The site is now rarely visited and needs to be re-positioned. However, our web host is leaving the village and, as far as I know, there are no plans in place for the makeover the site needs.

I believe there is scope for a much more active Sibford web site. It could include, for example, a directory of local services, a calendar of events, a marketplace for household effects, a lost and found page, current planning issues etc. There could also be a forum providing an opportunity for discussion of village topics, eg pub names, or an outlet where ‘Disgusted, Burdrop’ could have his say.

There could be international interest in the site from Sibford ex-residents, friends, relations, contract workers etc around the world. The network could be precisely targeted by means of village airmail stickers issued by the village post office.

What we need is an enthusiast who knows the technology of site building and someone who has the time to host the site. I would be happy to discuss ideas with anyone who feels they can help take these suggestions forward.