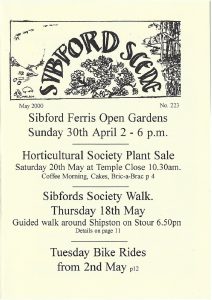 April 9th. I did not see the northern lights on the evening of April 6th but those from the village that did see them tell me that they made quite a show which, I have no doubt, would have been much better without the curse of light pollution. I count myself lucky to have lived through the war years when the blackout over Europe allowed us to see the night sky with a clarity that may not now be equalled anywhere in the inhabited world.

It was a very exciting rehearsal a few Sundays ago as for the first time the Sibford Millennium Pageant was run through from beginning to end. But for its creator it was a sad day. as David Ryall handed over the reins to co- producer Amanda Laidler. David is off the to the States to take part in a prestigious project with Sir Peter Hall and we all wish him and his family the very best during his time out there – but he will be back!!

The Sibford Millennium Committee would like to thank David for all the hard work he has put into taking the pageant from literally a dream to reality. Also thank you Amanda for ensuring that the show will still go on.

A BIT ON THE SIDE

Ever since those great-hearted residents of our villages of the Gower and the Ferris and the hamlet of Burdrop dipped into their pockets and contributed to the preservation of ‘Wheathills’ as a green oasis in the middle of our villages, I have wanted to thank them publicly. I was not in a financial position to help but my heart was and is in full support. I have long sought for words to express my thanks but all I could discover were of such banality that they were better left unsaid until three weeks ago. Then a programme on TV marked the centenary of the death of John Ruskin (1819-1900) the English Art Writer and Critic and stylist. Miraculously within hours I was presented with copies of six of his works – all quite by accident. A few days later I came upon the following extract from one of his books;

God has lent us the earth for our life. It is a great entail. It belongs as much to those who are to come after us as to us and we have no right, by anything we do or neglect, to involve them in any unnecessary penalties or deprive them of the benefit which was in our power to bequeath.

These sentiments sum up completely my appreciation of the ‘Wheathills’ benefactors and may also form the basis of the policy of the Council for the Protection of Rural England.

I commend these sentiments to your attention.
Yours sincerely,
Reginald Craig