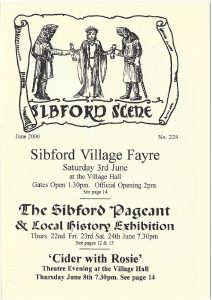 The May meeting was held at the home of Ginny and David Bennett. David had very recently returned from his 650-mile walk, visiting Premiership football grounds all round England in order to (hopefully) raise £50,000 for Workable, a charity he helped to set up ten years ago.

First of all, we were all very surprised at how fresh he looked. He assured us that he didn’t have a single blister on his feet, due he said to the lotion that Ginny had mixed up, of essential oils! He told us that the weather on the first week of his walk was appalling and on the third day there was snow, sleet, thunder and lightening.

He had a letter of support from Tony Blair, from 10 Downing Street and appeared on B.B.C.Breakfast News at one point. He had collected a tremendous amount of memorabilia — signed football shirts and footballs, to name a few — which will be auctioned off later, and had seen some wonderful areas of the country.

He seemed very elated about the whole experience, but added that he wasn’t thinking of doing it again!

Our next meeting will be on June 20th, when we shall meet at Maria’s House, Sibford Ferris – the home of Mary Mills. Mary will show us round her pretty garden.