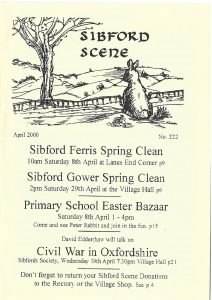 On 10th April next, David Bennett commences a 650-mile journey – “on foot”. His mission to visit every Premiership Club and Ground, commencing in Southampton and concluding in Newcastle at St. James’ Park on the 13th May.

The aim of the walk is to create awareness on the range of abilities of disabled students and graduates – there are in excess of 60,000 in the UK – and to raise the profile of the charity Workable of which David is currently the Director.

The route will include a visit to Banbury United on Saturday, the 22nd April followed by a night in his own bed! Before starting again at 10 am on Easter Sunday for a 20 mile hike to Warwick – prior to a week’s activities in the Midlands, including calls at Villa Park and Highﬁeld Road. The company of Sibfordians would be welcome – mileage is at your discretion – and passing through Tysoe, Kineton and Barford is on the agenda – together with the necessary stops for refreshments!

Your support to this unique event would be very much appreciated – and if you don’t fancy walking – we have opportunities for support vehicle drivers too!

Well it is now 2000 and 23 Fridays to the Olympic Games in Sydney Australia.

Mike and I have just returned, for me the last visit before D-day, while Mike will have one more look for two days in June. We will certainly miss our trips down under; to go to the sunshine at this time of the year is a real treat. The Australians are fun people to work with and their food is brilliant! Sometimes when it is so hot that the only relief is to jump into the air-conditioned car, I think of the cold and rain at home, and enjoy being cooked.

We are fortunate enough to stay in a flat in North Sydney, which sits right on the harbour over looking both the Opera House and the famous Bridge. The view is amazing especially at night with the changing lights. One night we had just dropped off to sleep when we thought war had broken out, but we were witness to the most fabulous firework display I have ever seen. The reason for such a scene was the docking of the QE2, which was spectacular on its own.

The Equestrian site for the Olympics is forty minutes from the city and we leave early to avoid the traffic and to get the bulk of the course walking done in the morning. It was great to see the change from last autumn, they have had some wet summers since the project was started in 1997 and so the trees and grass have grown significantly. People visiting will not believe how much the site has improved. The entire going where it could not be upgraded with topsoil and stolanizing (which is planting grass with the runners) has been turfed. The stables, indoor school and buildings look good having been finished last September when we had the test event.

Alan Willis from England and his two sons head the building team with five Australians. They have been out there for six weeks this spring and Mike goes in every day to set up where he wants the jumps built and what height. Course Designing is not only making sure that the right jumps are in the right places, but all aspects of the speed and endurance day, a main concern being, is the going good enough? Horses are very precious and good going makes it easier for them to enjoy a good performance. One of the reasons for Mike being asked to take on the job was his experience in running events and a number of meetings are with the organising group. The building lads are a great bunch and we have a fun time discussing dressing for the fences to giye them an Australian feel. One complex is an old Australian homestead, and the lads borrowed items to add to its authenticity.

One thing, which is difficult to get used is the snake population. I am more wary now than I was originally. When we first arrived the grass was so long that you could not see anything and l gaily walked through putting in post where told! During September they held the test event having made (in places they cut and filled tons of soil) the track and maintained the short grass, there were snakes everywhere. An SOS from the Police during the test event, could the building team please come and retrieve a brown snake from the cutting as the competitors could not get passed to walk the course. Alan turned off his radio! Brown snakes are very aggressive and poisonous.

Well the next visit in the company of family and friends will be the real thing, keep your fingers crossed for a good British performance, we will certainly being cheering them on.

[I am told that some Villagers will be in Sydney for the Olympics and a report on the event from a spectators stand point would be appreciated. Ed.]