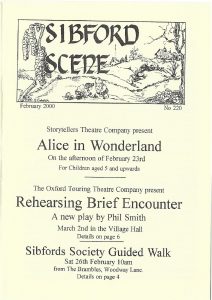 I am writing in response to Mr Bryan’s letter in December’s Sibford Scene.

I am the owner of the pick up truck to which Mr Bryan refers to as being parked “so thoughtlessly” and as such feel that I should explain my reasons for parking my vehicle where I do.

I have been living in Sibford since the end of March 1998 and l love it, apart from the speeding traffic in and out of the village. Being at the end of the village you can hear the speed of the traffic. It is amazing how often you hear locked brakes on school day mornings, which suggests to me that the problem is mainly caused by people taking their children to school, rather than the villagers.

After a couple of neighbour’s cats had been killed on this short stretch of road, l decided to contact the Police and the Council to try and do something about this problem, but to no avail.

Then upon returning from work, I was horrified to find my cat had been hit by a vehicle. Her face was badly injured and she had a shattered jaw.

She was lucky to be alive!

This was the “last straw” for me and as a result decided something must be done to try and slow the traffic down, hence parking my pick up right outside my house.

I have however carefully studied the road to ensure that there is enough room for the larger vehicles, such as buses, tractors etc to pass safely and have not just parked it “without any consideration” for other road users.

I would rather not have to park my pick up where I do, but it does seem to have slowed down the traffic quite considerably, which surely must reduce the chance of someone getting injured? The speeding traffic is the biggest danger!

I apologise to any villagers for any inconvenience I have caused, but I hope you will understand my reasons for doing this. If anyone has any alternative suggestions, I would be pleased to hear from them.

The head of Sibford School gave a report on the long term proposals for developing the school.

The bungalows in Back Lane have been sold and the proceeds will be used to create a new main entrance from Hook Norton Road which is being considered. for planning permission at the moment.

The next phase will be to sell the Manor as the building needs huge amounts of money spent on it to replace the roof and to bring it up to 2000’s standards for fire protection etc. Disposal was planned as long ago as the 1930’s. The school would dispose of the entire site including the garden and the land behind. It is not yet on the market but approaches have been made by various developers. It is thought that the site may be developed as flats, possible refurbishing the swimming pool and demolishing Gillett House to build “executive” houses.

The site would be exchanged for a major development of the Hill site and clearly phasing would be important. The heart of the new development would be a new meeting hall, of circular design, which would be capable of conversion to a 630 seater concert hall. This would be a huge asset, not only to the school but also to the area as nothing like it exists. The old hall would be rebuilt as a theatre complete with purpose built changing rooms, etc. This could be an asset to the village and would attract public productions as well as being useful in attracting holiday lets. A new music building would be situated by the South Corridor with state of the art facilities suitable for GCSE and A level courses. A new Art block complete with a sculpture garden and exhibition facilities is also proposed. This would include CAD and film production facilities. A new swimming pool will be built adjacent to the Sports Hall.

The whole campus will be pedestrianised with a circulation route for trafﬁc to and from it. The existing main entrance will be blocked off. All the buildings will be of a high build quality rather than the rather cheap tradition. of the past.

The school has now decided to retain the Ark.

Being a Quaker organisation, the school cannot apply for National Lottery funding and so raising money will not be easy.

Councillors were very interested by the plans but clearly the impact on the Village will not only come from the new school drive but also from what the developers want to do on the manor site. Access will be an issue as will parking and maybe pressure to build on adjacent land in the valley.