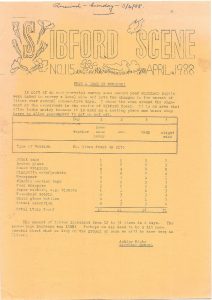 The Sibford roses - spilled wine of the gods

A little piece of England From a cutting 65 years ago

The other Sabbath evening in Sibford Gower, where the meadows of Oxford county caress the pastures of Warwickshire, I found the roses clinging to the thatched roofs. The spilled wine of the gods stained the stone walls of every garden on which the eye did rest. I have been many times to Stratford-on-Avon and I have traced out anew, by footstep as well as fancy, the borders of the beloved Forest of Arden. Every line of leafy Warwick I thought I knew as perfectly as a singer cons his song. I was mistaken. On the fringe of the two counties is a little poem – not a village but a poem – and its name is Sibford Gower. I love England as a bridegroom loveth the bride. If I were a star looking down at eventide upon the English earth beneath and the hushed honeysuckled villages enfolded there, I sometimes think I should not know which to choose for perfectness of quiet beauty. But among the first six would be the village I have named above; and, as Mr. Birrell sorrowfully laments concerning a certain book which he did not read until the middle years, I am sad that more than forty Junes of my short life have come and gone before I have seen Sibford Gower. Stratford is beautiful, but Sibford Gower is exquisite, an unblemished gem of blossoming loveliness. It is England in excelsis.

Perhaps I do unwisely to write this eager word of praise. The word may kindle a pilgrimage, and a crowd of hurrying travellers might steal the stillness from the Sibfords. I will take the risk, for, after all, the rich and gentle charm of Sibford Gower must in a moment sip the poison and passion of haste from the traveller’s blood. Ten thousand roses with ruby lips will whisper: Stay! And one must obey the instincts of the gods. Only by spilling the casket can the joys be shared, and only by singing his song can the singer feel within himself the theme’s deep thrill.

All England should know of Sibford Gower, this piece of living Shakespeare. I give thanks to my friend, Mr. Frank Lascalles , the Master-in-Chief of the Pageant of Empire  now being staged in the Stadium at Wembley. He it was who allured me to his dwelling-place to keep the festival of roses. If, I thought, as we walked together amid the glories of his gardens, if by a miracle we could transport this old-time manor house to Wembley, not a visitor from over the seas but would bow down before the benediction of it and feel in his blood the sacrament of June. Mr. Lascelles, in the phrase of the late Mr. W.T. Stead, is the Orpheus of England. More than any other man he, in pageant-form recalls to our hearts and minds the beauty of the buried centuries. He is wine-bearer to the mortals. From the cellars of the past he brings forth the wine-thoughts of the vine-yards which are no more. Now I know the secret of his passionate evangel. Who could live in the choicest bit of old England and move among ghosts and dreams and inspirations numberless and keep his harp unstrung?

(From an article by Sydney Walton in The Yorkshire Evening News).

Letter to the Editor

May I please have a space in the Sibford Scene to express my feelings to say how sad I am that you have to be a newcomer to Sibford to be noticed – never a mention of the sick or aged in the village who have lived here all their lives.

Also the church-yard saddens me with people too lazy to take dead flowers home, instead of dumping them in a heap in the church- yard. It all helps if people could be tidy.