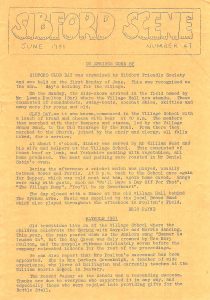 In Springs gone by

SIBFORD CLUB DAY was organised by Sibford Friendly Society and was held on the first Monday of June. This was recognised as the annual day’s holiday for the village.

On the Sunday, the side-shows arrived in the field owned by Mr Lewis Poulton (Snr) where the Village Hall now stands. These consisted of roundabouts, swing-boats, coconut shies, skittles and many more for young and old.

CLUB DAY, as it was known, commenced in the Village School with a lunch of bread and cheese with beer at 10 a.m. The members then marched with their banners and staves, led by the Village Brass Band, to the Old Vicarage by the Pond. From there they marched to the Church, joined by the choir and clergy, all fully robed, for a service.

At about 1 o’clock, dinner was served by Mr William West and his wife and helpers at the Village School. This consisted of roast beef or lamb, and Yorkshire pudding with vegetables, all home produced. The meat and pudding were roasted in Mr Daniel Sabin’s oven.

During the afternoon a cricket match was played, usually between Gower and Ferris. At 8 p.m. back to the School once again for Supper, which was cold meat and ham, again home cured. Songs were sung with gusto, such as “We’ll Have a Day Off For That”, “The Village Pump”, “You’ll be My Sweetheart”.

The day closed with a Dance at the old Village Hall behind The Wykham Arms. Music was supplied by the local Brass Band which also played throughout the afternoon in Poulton’s Field.

Old traditions live on at the Village School where the children celebrate the Spring with Maypole and Morris dancing. This year, the rain poured down as the Juniors sang “Summer is Icumen In”, but the May Queen was duly crowned by Mrs Mary Poulton, and the maypole ribbons intricately woven before the company retreated indoors for the rest of the proceedings.

We can also report that Mrs Poulton’s successor has been appointed. She is Mrs Barbara Greenhalgh, a teacher of wide experience, who lives at Mollington and currently teaches at the William Morris School in Banbury.

The recent Bazaar at the School was a re sounding success. Thanks are due to everyone who supported it in any way, and especially those who were cajoled into providing gifts for the Bottle Stall.