A Quaker clock in detail 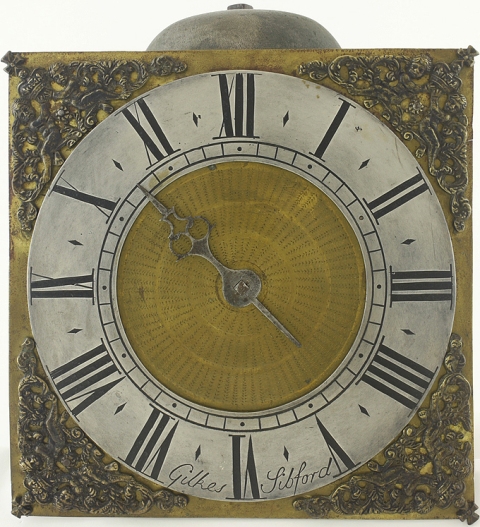 The photographs below are of a wonderfully original, early 18th century, hook-and- spike wall clock made by Thomas Gilkes of Sibford Gower in Oxfordshire from around c1720. The wafer thin, solid nine inch square brass dial has the twin cherub and crown (with cross) spandrels attatched to the corners and there is a rather attractive zig-zag engraving to the dial centre. The original iron hand (with long tail) is retained and the chapter ring is signed Gilkes Sibford. The iron and brass birdcage movement with hoop and spurs is in untouched and original condition throughout and has some nice early individual features including some interesting iron work. For example the nicely shaped iron tapered arbors have no separate collets; instead the arbors are attached directly to the wheels. This shows that Thomas Gilkes was still using 17th century techniques during the early part of the 18th century.

(The text and photographs were provided by Lee Borrett of www.earlyclocks.com. Lee would be interested to hear about other Sibford clocks; contact him via the Wanted page of his website.)

Click on a photograph below for a closer look.