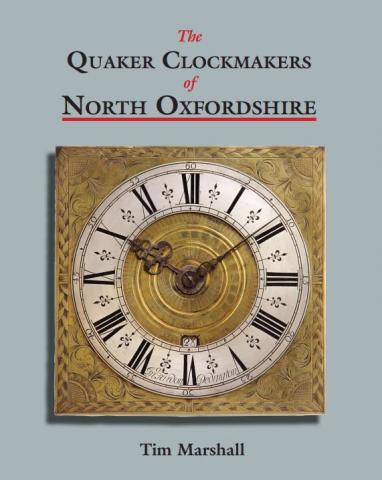 We are grateful to Tim Marshall for supplying this article about the Quaker clockmakers of Sibford. Tim has drawn from the introduction that he wrote in the leaflet for the 2013 exhibition of Quaker  clocks in Adderbury, and from his book The Quaker Clockmakers of North Oxfordshire , signed copies of which are available from Tim – contact him on 01280 822 682 or by email at tim.marshall8@btinternet.com , or visit Tim Marshall Clocks .

The history of Quakerism in North Oxfordshire is almost as long as Quakerism itself, arriving in Puritan Banbury during the 1650s, and quickly establishing itself in the rural area to the west and south of the town during the second half of the seventeenth century, centred around the village of Sibford Gower, where the first Sibford Quaker Meeting House was opened in1681.

The same could almost be said about domestic clockmaking, although it was not until the 1689 Act of Toleration  created the stability and safety for the Quakers that the two converged; when we see the emergence of a group of Quaker blacksmith turned clockmakers, in the form of the Gilkes family of Sibford Gower and later the Fardons of Deddington, who went on, through their descendants, relatives and apprentices to dominate the craft and create a clockmaking tradition that was to last throughout the eighteenth century. During this time they produced one of the most iconic styles of English country clockmaking, instantly recognisable to enthusiasts everywhere – the iron posted hoop and spike clock with the distinctive ring and zig zag engraved dials.

They were most probably first produced in the workshop of Thomas Gilkes senior of Sibford Gower around 1700, and continued by his three sons — Thomas junior (who remained at Sibford), John who moved to Shipston on Stour, and Richard who became the Adderbury clockmaker — and Thomas senior’s apprentice, John Fardon, who went on to establish the Fardon dynasty of clockmakers at Deddington. They were followed by further generations, each in turn demonstrating the Quaker ideals of education, apprenticeship and travel in their working lives.

From this group of clockmakers a network of trade was created throughout North Oxfordshire extending, after 1750, further afield to Charlbury, Burford and Milton under Wychwood. At each location we find the local clockmaker, whether that be William Green (trained by Thos. Gilkes junior of Sibford) at Milton or Richard Gilkes at Adderbury, taking a prominent role in the running of their local Quaker meeting.

(Scroll to the foot of the page for photographs.)

During his long working life (which would have commenced on completion of his apprenticeship, after his twenty first birthday) he produced 30-hour iron or brass posted movements for longcase clocks, occasionally 8-day longcase movements, and iron posted hoop and spike clocks, characterised by the crude blacksmith type ironwork and ring and zigzag engraved dials in the North Oxfordshire tradition, either for hanging on the backboard of a longcase or to be hung directly on a wall. At least one brass plated hoop and spike clock is known, on display in Banbury Museum .

Thomas trained each of his three sons:

Thomas was a leading and much loved member of the Sibford Preparative and Banbury Monthly Meeting throughout his adult life, much lamented in the testimonial recorded in the Banbury Quaker Monthly Meeting minutes.

The son of Thomas senior and trained by his father, he remained at the Sibford workshop producing the typical iron posted hoop and spike clocks in the North Oxfordshire tradtion. At least one 8-day movement is known.

He trained each of his three sons in the craft:

He also trained William Green from Tadmarton who moved to Milton under Wychwood in1752.

Thomas followed in his father’s footsteps to become a prominent member of the Sibford Preparative Meeting and the Banbury Monthly Meeting.

Apprenticed to his father Thomas junior of Sibford in1764 aged 16. His father’s will drawn up in 1770 made him a joint executor with his brother Richard, and a benificiary. By the time the will was proved in 1773 only Richard was present who affirmed he was the surviving executor.

He is included in the Sibford list by virtue of a brass face 30-hour longcase clock signed John Wells Sibford recorded by Beeson probably dating from around 1785 when he is recorded in the Banbury Monthly Meeting minute book for his marriage to Mary French of Sibford.

He was apprenticed to Thomas Gilkes 3 of Charlbury commencing in 1766. He trained John Gilkes (the son of Thomas Gilkes of Shipston) commencing in 1789 after establishing himself as the clockmaker at Shipston. At Shipston his output comprised mostly 30-hour longcases although at least one rare painted face iron posted hoop and spike clock is known.

He was a leading member of the Armscote and Shipston Preparative Meetings.

The eldest son of Thomas Gilkes 3 of Charlbury, he was apprenticed to his great uncle Richard Gilkes of Adderbury in1780. He produced iron posted 30-hour clocks with painted faces, closely resembling the work of John Wells. Although buried in Sibford Quaker burial ground he was no longer a member of the Meeting.

The Quaker son of John Enoch a carpenter whose premises are opposite the Quaker Meeting House, he was probably apprenticed to a London watchmaker; certainly when he returned to the village for his marriage to Eliza Harris in1827 his address is given as Whitechapel. Eliza died in 1828 and Ezra then married Ann Prophett from Sibford Ferris in 1832 and settled for the rest of his life at Sibford Gower.

He was a fairly prolific maker of painted face 30-hour and 8-day longcase clocks of the period.

His brother John Enoch is best remembered in the village today as the builder of the terraced cottages in Colony Road.