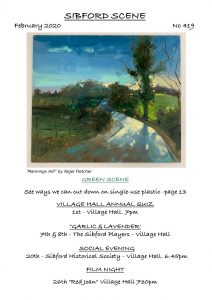 1877 - A New Lending Library for Sibford 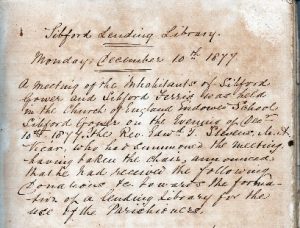 Among the many important political and social reforms of the mid 19th century was the Public Libraries Act of 1850. However, while this allowed municipal boroughs in England and Wales to establish public libraries, few were built until Queen Victoria’s Golden Jubilee in 1887 precipitated the setting up of several dozen. Then, during the 1880s and 90s private philanthropy saw the construction of a vast number of small and medium sized libraries.

Sibford established its own Lending Library at a village meeting held on 10 December 1877 under the chairmanship of the Vicar, Rev Edward Stevens. £24—3s—6d was ” donated for the purchase of books together with an offer from villagers of a number of books to start the library. A list of twenty one rules was drawn up by the fifteen strong committee governing the conditions and quarterly charges for membership and the term for borrowing books. The Library was to be open in the Gower School Room on Mondays between 12 to 12.30pm and 7 to 8pm. Every household was visited by a member of the committee so that all villagers should understand the purposes and benefits of the library and all books donated or purchased were covered with brown paper by the ladies of the committee.

At the end of the first year the library contained 320 volumes and a further 70 books were added for the following year at a cost of £20-7s-4d. During 1878 the total number of volumes issued was 3088 so villagers were certainly making use of their new facility. The operating costs of £35-9s-6d included the new books, bookcases, bookbinding, printing, repairs to books and an inkstand, ink and a candlestick for use by the Librarian. The accounts were presented at the Annual General Meeting and a tea was served to members and their families by the ladies of the committee at a cost of 6d each.

By 1896 the tea was augmented to include an entertainment comprising songs, recitations, musical solos and readings ending with the National Anthem – God Save the Queen (Victoria). The final entry in the Minute Book was the report given at the Annual Meeting on 20 January 1898 when several rules were amended. An entertainment followed led by the Sibford Choral Society together with many other items including songs, recitations and giees provided by villagers and friends. “Miss Daisy Thame ably presided at the piano during the greater part of a most enjoyable evening.”

There was a balance of £4-10s-9d in the Lending Library Accounts adopted in January 1898 but as this is the last entry it is not clear whether it continued into the new century.