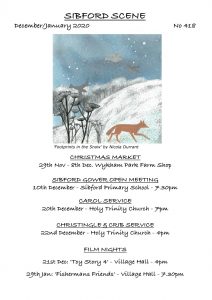 Evacuees in the Sibfords (part 2)

Evacuees coming to the rural areas found great changes. Sibford had no sewage system installed during the war years so most evacuees had to adapt to earth closets with their outdoor location and associated smells. At Grounds Farm there was only one outside bucket lavatory which must have required frequent emptying. Few houses had electricity so candles and oil lamps were used. The majority of houses had no running water and, with little heating, many city evacuees considered that they had been moved to the slums! Even if they had been able to stay at home in the cities, life there would also have changed. All street lighting was discontinued with a strict black out being imposed to avoid towns and cities being identified by bombing raiders.

In addition to families being evacuated to rural villages the government organised the relocation of schoolchildren along with their teaching staff. In general school groups were kept together wherever possible. Special trains were organised and groups of schools were brought to the rural villages. The children and staff were billeted in ones, twos or threes depending on the available space in any partially occupied homes. The children were taken to Gowers Close in the Gower and distributed to village homes from there. The home occupier was then responsible for the care and catering for their evacuees. These children suddenly increased the number of pupils in small village schools and in Sibford they could not be accommodated in the classrooms available. The Mission Room in the Gower had been put in reasonable repair by the Friends War Victims Relief Committee workers with some local help. It was used as accommodation for some of the evacuees. The Friends Meeting House was used as an annex to Sibford Gower School. Divided into three classrooms each area catered for pupils in 3-year groups to cover the nine years of schooling to 14 years of age as required at that time. The graveyard allowed for some playground activity – but nothing boisterous! School meals were provided in the Old Village Hall situated at the back of the Wykham Arms. The evacuee children joined in all the village activities including Cubs and Scouts which were run by Eric and Mabel Payne during the war years. Sibford Gower Manor was also used as a packing factory for explosives and evacuee children joined in the workforce helping to pack the boxes there.During the six to seven months period known as the ‘Phoney War’, a few evacuees returned to their city homes but, due to the requirement to continue education, most children remained with their village families. Long lasting friendships between evacuees and their host families were made, some are still in touch and some even made their permanent homes in their new rural villages enjoying life in the countryside. I would love to hear from anyone who could add their own evacuee stories.