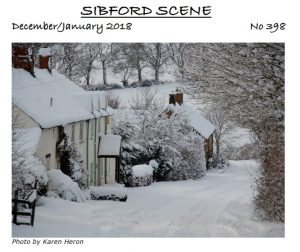 A big "Thank you"

After a very enjoyable evening watching ‘Hidden Figures’ last Wednesday we’d like to say a big ‘Thank you’ to all responsible for the refurbishment of our lovely village hall, and in particular for the new AV system which has surely taken the movie-viewing experience to a whole new level. The sound and image quality now rival that of other – purpose-built – viewing theatres, and the larger screen size makes such a big difference – especially for those who prefer to sit nearer the back!

We look forward to future screenings in our very own ‘Sibford Cinema’.

PS. And – a special thank you to Petra B. for arranging the screenings.

The villages have recently suffered the loss of three distinguished residents. First there was Arnold Lamb, a much loved resident whose family have lived in the Ferris for some generations. This was followed by Valerie Parkinson, resident of Burdrop recognised by her walks with her beloved companion Darcy and a regular follower of the Fielding Day Centre. A day afterwards came the news of Ian Warden from the Gower.

Ian Warden was born in Coldstream in Scotland on 10th March 1925. The younger of two sons whose parents died when they were young and who were brought up by their aunt on a farm nearby along with, later, two half sisters. At the age of 17 Ian volunteered for the Royal Marines, a compromise between the Navy which he preferred and a family tradition of soldiers. From this he was turned down as too young but, as soon as possible, he joined the Navy and trained in submarines. Like most service personnel in dangerous occupations, he said very little of his wartime experiences but one or two hair-raising stories of lonely vigils, minefields and the like did escape and references to HMS Vivid, his first posting also his Mediterranean and Far Eastern service.

After the war, in 1947 Ian met Maureen and they were married in 1948, going to live in Englefield Green and later to Egham where they brought up their two sons, Malcolm and Ian and where Ian senior worked nearby in the diesel manufacturing industry until retirement in 1986. It was then that they moved to Sibford and they instantly joined in every activity available in the village, normally taking a proactive part and soon becoming indispensible. Annual builder of the beautiful Easter Garden in the church and Nativity at Christmas and keen supporters, founding members of the Fielding Day Centre (for which Ian was still drafting the volunteers’ rotas at the time of his death) and of the Sibford Society, for many years helping to print and personally stapling the monthly Sibford Scene, official welcomer of new village residents, sign writer for village events, Poppy Day sellers, Founding members of the Sibford Wine Imbibers Group (SWIG) and both were regular helpers at the Leonard Cheshire Home and Katharine House.

Ian was a man of quiet strength, always calm in a crisis, always prepared to roll up his sleeves. A loving family man of indomitable spirit, determined and independent. In later years with the loss of Maureen and of his younger son Ian, he was never bitter or complaining but showed just stoic acceptance, thankful for all the love they had shared. Even the melanoma and loss of his nose, the cruellest of fates, produced “There are plenty worse off than me”.

Both Ian and Maureen loved family, friends, neighbours and the people of the Sibfords and was especially appreciative of those, with his family, who gave him regular help in his declining years. Ian often quoted a poem by another past resident, Sheila Walsh:

I left my old familiar place and friendships far behind
And came to unaccustomed land not knowing what to find
I saw the widespread landscape, the springing flowers, the sky.
The beauty all-surrounding that took and held my eye.
Though all these things enchantment gave, they are the lesser part,
The welcome from the people-ah!-the people took my heart.

Ian will be greatly missed by many in Sibford but his loss will be particularly felt by his large and loving family, including his three great-grandchildren, to whom goes the sympathy of us all.

The visit from our speaker on 19th October is now a long way off, but Dr Gillian White’s talk on’ The Great Fire of Warwick’ was unforgettable – a wealth of information delivered with great panache and humour.

Unfortunately, the long-awaited talk by Dr Richard Buckley on ‘Life after Richard III’, due to take place on 16th November, had to be postponed. We found not one speaker, but two at short notice: Oswyn Murray and Ivan Tyrrell.

‘How well do you know your father?’

Oswyn began with his depiction of the journey of a bundle of love letters written in 1943 by a young woman, Eileen Alexander, to her beloved who was serving in Cairo and later became her husband. It is an entrancing story, and all based on so much coincidence -the connection between this young woman and Oswyn’s father, the very fact that Oswyn’s name is unique, the dedication of the man in Glasgow who transcribed the thousands of letters, eventually having them published, and seeking out Oswyn.This is the compelling stuff of fiction but it is all true. It must have been a joyous revelation for Oswyn to learn from a stranger, long deceased, things about his father that he never could have known.

His message : we are the custodians of our parents’ memories.

As if that were not stunningly interesting enough it was followed by Ivan Tyrrell’s fascinating story of his life – his memoirs condensed into half an hour. We were expertly taken from his babyhood to his boyhood and then to his adult life, and shown how all his experiences played a role in the person he has become: hypnosis as a 14 year-old when his arm was fractured, his genuinely curious questions on Bible stories, for which he was beaten at school, his artistic gifts, and later his interest in depression and psychotherapy. We went away, our heads spinning with Archimedes’ Eureka moment, Idris Shah, the Law of all Living Things, Why we Dream, The Human Givens ,The Brain’s Big Bang ,Sufism, and much, much more.

On behalf of the Sibfords Society Committee, many many thanks to both of you; please come back and let’s have a week-long seminar next time!

We are taking a break for Christmas and our next meeting will be the Social Evening on 15th February 2018. Please lend Tony Haynes a photo of yourself as a child for the quiz, and if you have an amusing anecdote about Christmas please let us know.