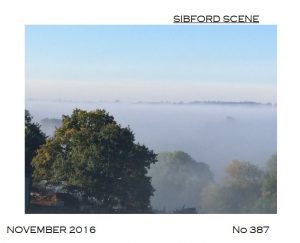 … said someone at the Sibford Farmer’s Supper and we hadn’t even put the final finishing coat of paint on the walls then!

Phase Two of the Village Hall refurbishment is just about complete. Tappers Interiors had completed all the building work in just three weeks during August. Because the hall is used so frequently it was October before we could find six consecutive days to do the decorating and then these had to be split into two periods. The paint, brushes and other decorating equipment was kindly donated by Brewers Decorating Centre, Banbury.

Thanks are due to the tremendous efforts of a small band of villagers who worked over a period of six days to decorate the inside of the large hall. A generous donation by the Town Estate Charity has enabled us to provide new window blinds and door curtains completing the finishing touches.

In 1957 when the current hall was built the village thought they had a hall of which they could be truly proud. The same can be said today. Sibford Village Hall is the best in the area thanks to the ongoing enthusiasm of the Management Committee who have raised over £40,000 to bring stages one and two of the hall refurbishment to fruition.

Watch this space for phase three!

Having been running a moth trap in my garden throughout 2016 I thought it might be worth sharing some of the results. To date (10th October) I have put the trap out on 100 occasions and have caught a total of 7687 individual moths of 333 different species (221 macro moths and 112 of the generally smaller micro moths). Records are submitted to both the County Moth Recorder and the National Garden Moth Scheme.

As well as catching 5 species of the large and spectacular hawkmoths (Poplar, Privet, Eyed, Elephant and Small Elephant) there have been a number of other notable catches.

On the 8th July I caught an interesting looking micro moth which turned out to be Grapholita lobarzewskii . Like many micros it does not have an official English name but is sometimes referred to as the Kent Fruit Piercer. There are not a lot of records of this moth in the UK and this was the first record for Oxfordshire.

Another first for Oxfordshire was a Gypsy Moth caught on 5th August. This species used to occur commonly in East Anglia but became extinct in the UK in the early 1900s. Recently populations have become established in the London area and around Aylesbury. Because it is considered a pest species in parts of the continent, Defra attempted (unsuccessfully) to exterminate the London populations. The females of the species are heavy and reluctant to fly so the moth spreads to new areas by means of small larvae attached to silken threads being blown on the wind.

A third species of interest is the Marbled Green. Unlike the others this is certainly not a pest species. The larvae feed on lichens on rocks and walls and the adults are camouflaged to blend in with the lichen covered surfaces that they sit on by day. When I caught a single specimen in August 2015 it was considered a good record. During July and August 2016 I have caught another 36 including 12 in a single night suggesting that there is a well-established population in the Sibford area. This used to be considered a species confined mostly to the coasts of South and South-West Britain but unlike many species of butterfly and moth appears to be increasing its range.

Once they have been identified and a photographic record kept, the moths are released unharmed.