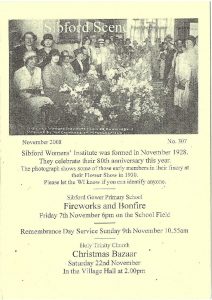 The History of Sibford W.I.

The first monthly meeting followed in mid November formally run with sixty members – all wearing hats – and following Lady Denman’s (the National Chairman) booklet “Procedure at Meetings”. The annual subscription was set at two shillings and stayed the same all through the 1920s and the 1930s. There was a large grant from the government subsidised by the Ministry of Agriculture. This was to keep the subscription low and to encourage rural women to join the Women’s Institute.

The purpose of the W.I. was to improve conditions in rural life and “make use of local produce and to educate countrywomen in food preservation, hygiene and the development of community fellowship. Programmes were sold for one penny each with the first six pro- grammes being Folk and Games, A Lantern Lecture on Spain, Cookery, How our Grandmothers Travelled, Health and Handicrafts. Visitors came by invitation only on special days. As from 1930, the monthly meetings were held on the first Tuesday of each month in the New Room, Sibford Ferris. In the early years, extra activities included a W.I. Choir, a Flower Show and classes in First Aid for the Home. Mrs Edna Wealsby, of Sibford W.I., was the first member in all England to pass the National Federation of Women’s Institute Gardening Test of 1942.

In the 1960s a Rounders Team was started. The 1970s saw the formation of a Drama Group producing Bride Unknown – a legend of Mary, Queen of Scots by Joan Brampton, Hidden Frontiers by Peter Assinder – an Austrian adventure, The Hostage of Toledo and The Spinsters of Lavender Lane. Crochet, knitting and needlework classes took place on a regular basis.