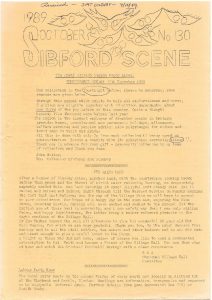 The summer holidays were over, and passing through to the MELLOW AIR of autumn was interesting to watch – the changing of the Trees, Fruits and Flowers along the roadside. The field laying dormant after the gruelling haymaking and harvest time where the men and their horses started their ploughing in the furrows for next years planting. So different from nowadays, the fields have no time to breathe.

The latter half of the summer season was taken up with the Cricket Team battling along to the final in Banbury for which they won the honours at least three times in the 30s and 40s. Some of the family names who come to mind were Harris, Haynes, Herbert, Hooper, Inns, Long, Lambs, Sabins, Parkin, Poultons, Ward and Woolgroves. Two umpires followed them around doing their duties as the years went by, their names were Lines and Salmon. A few of those mentioned will be repeated in the Christmas Edition under the section “Personal curiosities”.

The first Sunday in October was the Annual Harvest Services at church, 11.00 am and 6.30 pm. The congregation was full of relations and friends from Epwell, Swaicliffe, Tadmarton, Shutford and Hook Norton, and the farmers were well represented from all the outlying farms, joining in heartedly singing their thanks for harvest work well done. This was led by a strong choir led by the organist, Miss Thame (Aunt of the present organist) practising for weeks to give off their best when the Anthem was sung. Monday evening, 6.30 pm many people walked to the church with their lanterns and flashlights to buy the produce, with the money going to the local hospitals.

The next Sunday evening the Vicar and his choir and those who wished to walk the road to Swalcliffe to sing their Harvest Praises as it was a very old tradition to visit the Church once a year.

The Thursday after the 12th October the streets of the Sibfords were empty because everyone went to BANBURY FAIR, filling Mr Tanner’s buses all day and again every hour from 6 to 11 pm. Prices of the entertainments were in those days 6 pence and 10 pence, a great time was had by all, young and old in an old fashioned way.

Into November – dark, cold and frosty nights were closing in but the village was lit up by the Friends School (so called in those days) with fireworks and a bonfire and the evening was a must because we were welcomed to join in.

Whist Drives and Dances were held in the village Hall (behind the Wykham Arms) or Village School.

Sibford Ferris were lucky to have a delightful place called “The New Room” where they had a MENS CLUB club five or six evenings a week, and the Women’s Institute was held each month. The SIBFORD CHORAL SOCIETY, under the baton of Miss Thame spent many hours during the winter in the New Room preparing their pieces for the Chipping Norton music competition held each March. The Banners and First Certificates were numerous and many of the choir brought home firsts in solos and duets. I was present at one competition when the adjudicators remark was as follows – “Where does this choir come from? They must live on top of a hill, their voices are all so clear and true.” We all shrank onto our knees!

November 11th was a date we remembered the awful thought of the two wars. The Scouts and Guides marching to church with their Colours. The girls marched from the “New Room”, Sibford Ferris, down and up the Hill to Burdrop and round to Church WET or FINE; this is remembered by quite a few of us left. The boys marched from the Village Hall at Sibford Gower.

In addition to the thought of the wars, oh yes, the villagers did their share of work in 1940 – HOME GUARDS (L.D.V.), A.R.P. (Men and Women) and LAND ARMY – young girls arrived from many places and we managed to keep a few who married the boys around. The Manor Hall (owned by Mr Dodd) was turned into a Box Factory and was open most days and nights manned by men and women of the villages around.

We were very lucky in the early years to have many entertainments such as Carol Singing around the Village by the Quaker School Staff and Children. On Parents Weekend and especially Old Scholars Whitsun weekend the village opened its doors to give rest to the over-spill with bed and breakfast, and we felt part of the occasion. The kitchen, laundry and garden staff were mostly men and women from local homes who were grateful for work. Now we must wish the business of the development of Sibford School will be a huge success and hope they will live alongside us for the future years.

ACREDITCH. From Sibford Ferris the pupils and staff walked through to Sibford Gower for 11 o’clock services each week. The Methodist Chapel held their services again at 11.00 am. The preachers Joseph Alcock, Mr and Mrs Basham and Mr and Mrs Stewart were hard working and raised their little church services to what they enjoy today. A great lady in the Chapel came forward – MRS TARVER who lived in Burdrop and ran an enormous Sunday School for some time.

The bell, ringing for the HOLY TRINITY CHURCH service again at 11.00 am was an onlooker to the scene below. Can you imagine the well known “Acreditch” full of worshippers passing one another to their respective place of worship; this is no dream but a reality, as a few of us remember it well. The girls and boys in their green and yellow uniform and local people in their “Sunday Best”. A HAPPY FAMILY all around!

Letters to the Editor

As the new owners of Sibford House and Oddy’s Bank we would like everyone to know that whilst we prefer people to stay to the right of way when crossing the field, once the snow arrives, all will be welcome to sled as usual.

However, we would add that the Village and Sibford School children who come to see the horses are always welcome to do so wherever the horses are. But do please be careful when giving them tit-bits as they can get rather pushy in their eagerness to get their first. Pollyanna, the smallest and bossiest is expecting a foal at the end of April – fingers crossed that all goes well!

Thanking you for allowing me this space.
Yours faithfully, Julie Ide

I agree wholeheartedly with the sentiments expressed by Mr Ernest Jones in last month’s “Scene” concerning detailed news of Conservative Party happenings locally. However, I see that the Editor in his infinite wisdom does not agree: since this means readers will have to be entertained to further news of this group in future, I suggest that all other local political and politically aware groups also have an opportunity to report on their events. We readers can of course choose whether to spend brain space or not on reading them.