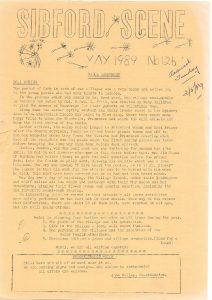 The period of time in both of our villages was a very happy and active joy to the young people who had many haunts to explore.

In the Paddock which was owned by Mr. Fred Ward, the village shoe-mender in Burdrop now owned by Col. & Mrs. C. Frith, was visited by many children to pick the masses of Snowdrops for their parents on Valentines Day.

Along came the warmer spring weather and their tracks moved to the Spinney down below Wheathills fields now owned by Miss King. There they spent many happy trips to pick the Bluebells, Primroses and watch the wild animals and hear the first chorus of the birds.

Easter arrived, the walks became longer to Whichford Woods and Good Friday after the church services, families filled their picnic boxes and off to Compton Wynyates where they found the Violets and Primroses covering each side of the road. This was the place where the first spring picnic was taken before tramping the long way back home before dusk arrived.

Cuckoo, cuckoo, was the call each one was listening for around the 17th April. Oh no! Oh no! Someone else was in full force before that. Mr. Jim Stowe of Burdrop had better ideas; he gave the call sometime before the proper date. Into the fields he gaily went, blowing hs whistle which was a true likeness. The cry was always “I have heard the cuckoo, or is it Mr. Stowe?” The legend is that his wish for the whistle was to be buried with him when he died, this must have been carried out as it has not been heard since.

May Day was a day of rejoicing. The Village School, under their Headmaster and staff walked all the roads and pathwaya with their May Queen and her atttendants, singing their flower songs and country whistles, including the old favourite sound-comb playing.

An interesting point is raised in this article – all these activities were solely performed on two feet not in four wheels. This may be the reason that Sibfordians, there are about 50 of them left, have reached an old age, and are still going strong.

All to no avail! The Rector had pressed the automatic button and the old Roneo machine creaked on, while he was having his afternoon Snooze!

The deadline was missed, so all that can be reported is :-

The meeting was held as advertised. Familiar annual faces were present and the inevitable Cottage Cracking village affairs were aired – did some-one say “pot-holes?”. Ponds, parking, dangerous fumes from inconsiderate buses and sleeping policemen were all discussed.

It will take a while, but we’re gradually building up this archive of complete copies of all editions of the Sibford Scene since its inception in 1977. Yet to be uploaded are editions between 2013 and 2015.