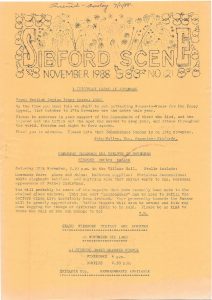 Does anyone know who was responsible for running over 3 ducks on SUNDAY SEPTEMBER 24th killing one (the pretty mottled one). Whoever did it must have known as “Pretty” was quite flattened. We don’t expect reparation but an apology would be something.

"Ability - not disability is the keynote"

The Manor House, Sibford Gower played host to five highly talented young people on Saturday 15th and Sunday 16th October when the Sibfords and Epwell Branch of the North Oxfordshire Conservative Association promoted “The Musical Event” on behalf of the charity “Opportunities for the Disabled”.

Music lovers travelled from as far away as London and Kent, Lancaster and Birmingham and yes – Switzerland and joined with many local people in the audience to witness a truly unique series of performances. Leading the way was Graham Hobson, who displayed his skills on the French Horn with pieces by Mozart, Saint Saens and Arnold Cooke – and this despite being paralysed down one side following a bout of pneumonia. Jo Skrimshire, who is currently studying at Birmingham University, then sang quite beautifully pieces by Henry Purcell, Fauré and William Walton, emphasising clearly that severe visual impairment does not hinder her musical development. The first half of the concert was concluded with a performance of Schubert’s Arpeggione Sonata for Viola by 21 year old Elisabeth Varlow, a student at the Royal College of Music and a recent finalist in the BBC Radio 4 ” Best of British Youth”. Lis has achieved much already both academically and musically, although since the age of 17 she has been profoundly deaf.

The second half commenced with a piano recital by Thuy Mallalieu, a Vietnamese orphan who was brought to Britain by an R.A.F. Pilot. Although blind, Thuy demonstrated his artistry on the keyboard with music by Mozart, Chopin and Debussy. The welcome return of Graham Hobson with a bass-baritone rendition of songs by Ralph Vaughan Williams and John Ireland, preceded the appearance of the special guest artist, Evelyn Glennie.

Evelyn Glennie is 23 and has had a remarkable rise to stardom. As with Lis Varlow, she is profoundly deaf and yet in 1986 at her debut at the Wigmore Hall, the Daily Telegraph said “quite exceptional talent – a degree of musical and technical accomplishment which was never short of breathtaking”. This talent was much in evidence in Sibford as she performed music on the marimba and xylophone by Chopin, Hubay and Creston amongst others concluding her programme with Scott Joplin and won a host of new admirers in the process. Indeed Sibford were most fortunate to have her services which were given entirely free for the charitable cause, for in the past year she has made regular appearances on T.V. and was a guest soloist on the Childrens’ Royal Variety Performance.

The Concert was superbly compered by the ‘gentle giant’ of BBC Radio 2, John Dunn, who before each performance conducted a short and pleasant interview with each of the young people. All had received the benefit of music scholarships through “Opportunities for the Disabled” and all were delighted to be playing together (it was their first meeting in over two years) with the specific purpose of raising funds for a further music scholarship for a disabled young person.

The Concerts raised in excess of £1,000 and with an anonymous donation of a further £1,000 the work and effort of the Sibfords and Epwell Branch of the North Oxfordshire Conservative Association in promoting the concert will be rewarded by a young disabled person entering a music school in 1989 with a scholarship to support their studies.

A delighted Tony Baldry, M.P., echoed the sentiments of the audience by declaring that it had been a truly unique occasion of the very best in musicianship and paid tribute to Mike Edwards , the owner of the house and Monty Pearlman and his committee for their vision to stage the event. New friendships were formed over an excellent supper at the end of the concert and many patrons left the Manor House with compact discs, tapes, records of classical music, including the latest recording of Evelyn Glennie paying Bartok with Sir Georg Solti, as a result of the raffle, the prizes for which held been donated by 5 Recording Companies.

The acoustics of the Manor House were superb, with the performers delighted to play in a cosy and warm atmosphere. Therefore it is not surprising to learn that Mike Edwards plans to run a series of fund raising events for worthy causes and charities featuring musicians playing a wide range of instruments and the invitation to all music lovers in the villages is “CAN WE FORM A SIBFORD MUSIC SOCIETY”? The message to those who missed this event – MAKE SURE YOU COME NEXT TIME.