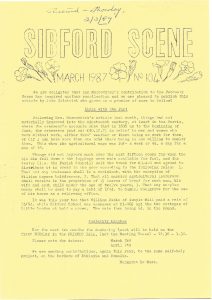 Links with the past

Following Mrs. Marcovitch’s article last month, things had not materially improved into the nineteenth century, at least in the Ferris, where the overseer’s accounts shew that in 1835 up to the beginning of June, the overseers paid out £90.12.7½ in relief to men and women who were without work, either thro’ weather or there being no work for them, or (if I can have more than one or!) there being no one willing to employ them. This when the agricultural wage was 10/-a week or 9d. a day for a man of 18.

Things did not improve much over the next fifteen years for when the old Elm fell down – the toppings were made available for fuel, and the Vestry (i.e. the Parish Council) sold the trunk for £3-4-0 and agreed to distribute it in bread to the poor according to the following rules: 1. That not any tradesman shall be a recipient, with the exception of William Haynes hairdresser, 2. That all married agricultural labourers shall receive in the proportion of 1⅓ loaves of bread for each man, his wife and each child under the age of twelve years, 3. That any surplus money shall be used to pay a debt of 7/4d. to Samuel Woolgrove for the use of his house as a relieving office.

It was this year too that William Sabin of Temple Mill paid a rate. of 15/6d. while Sibford School was assessed at £1-06¼ and the two cottages: of Little London at half a crown. The rate then being 6d. in the pound.