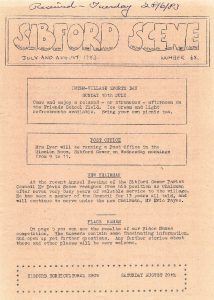 Although only three entries were received for the competition, their quality more than compensated for their small quantity.

The judges had no hesitation in awarding the winner’s prize to Mrs Alice Green. What a wonderful effort on the part of this 98-year-old Sibfordian to give us the benefit of her clear memory and wide knowledge of our village. We must all appreciate the time and concentration Mrs Green gave to her ten-page entry.

The two other entries were supported by excellent sketch-maps and deserve high commendation.

The Answers – a consensus

ACRE DITCH Near the Church from Wheathills Gate to the bottom of the school hill on the right-hand side of the road. It was a ditch about one foot deep. When the houses were built the ditch was drained and filled in.

ALCOCKS LANE Two suggestions: a) from Burdrop Corner to Tyne Hill, b) another name for Bond’s End Lane. Jo Alcock, a Methodist Preacher and postman lived there.

BEGGARS DITCH The lane connecting Epwell White House with the B.4035

CONSTITUTION HILL The entrance to Banbury Town from Sibford.

FEATHER BED LANE Workhouse End Sibford Gower. At the bottom end of the Gower where there was an institution for old people.

FERRIS ALLOTMENTS By Little London: the field immediately behind the last two cottages on the Banbury Road.

GALLOWS HILL A farm on the Brailes Road (Were sheep stealers or traitors hanged there ?)

THE GLEBE The land (and house ?) beyond the Old Rectory and pond in Sibford Gower.

MANNINGS HILL The steep hill separating Sibford Ferris from Burdrop and Sibford Gower. It was once called Little Sibford Hill, but took its new name from the Mannings family whose house there was set on fire by lightening. Tom Manning, the old postman would sit at the well half way up to rest.

PIG AND WHISTLE A public house on the main road near Tyne Hill where men used to gather to play a game called Kick Shins .

PITCH HILL Two opinions – either the steep hill on the main road from Tyne Hill towards Swalcliffe, or the small hill between Sibford Elm and the main road. Some say that the former used to be called Church Hill.

RYE HILL The farm on the ridge, reached by the road behind the pond.

THE SLINKET The site of the new Rectory, Sibford Gower.

BONDS END LANE The lane to the left, just before the pond. Was it named after the Bond family?

This list has been necessarily much condensed. Do look out for the display of maps and explanations at the Show and Fete. We shall print Mrs Green’s account of the Ferris Allotments in a later issue.

Thanks to all who took part and to the competition’s sponsor.

1  This is a newly formed group, the present members being:-

2  The aim of this circle will be to raise money for the various Sibford charities, by using methods not currently used, e. g. some or all of the following:

any other suggestions would be appreciated.

3  The success of this venture depends upon a few more public-spirited volunteers (over 16 yrs) , especially anyone resident in Sibford Ferris, to be on the Committee or just helpers. The tasks we need to cover core sale / collection of tickets, money etc., and the collection of waste paper.

4  Names of those wishing to help to any of the above please.

5  This is a very ambitious task and can only succeed with the cooperation and goodwill of all the villagers, and this would be greatly appreciated. It is also hoped that participation in these events will create a great deal of interest and bring us all
closer together. Any money spent on these events is helping towards the Sibford charities.