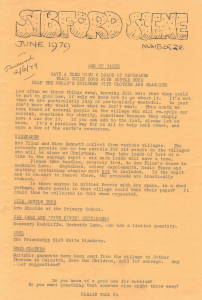 We congratulate Mrs Mary Poulton and Mr Jack Walpole who have both recently been presented with long-service awards by the Oxfordshire County Council after thirty years of teaching in the county. We asked them to give an account of their careers.

I began my teaching career in Sibford in 1936. The school was an Elementary School and catered for the education of children from 5 to 14 years. They were taught in three groups, Infants, Juniors and Seniors, roughly twenty in each group. I was in charge of the Juniors.

During the war we played host to a group of London evacuees. The older ones were integrated with our children, the younger ones being taught by their own teachers in the FriendsMeeting House.

After leaving Sibford, I spent two short spells as Head of Swalcliffe and Mollington schools and then in late 1942 Justin and I married and spent eleven halcyon years at Now Barn Farm, raising our family – Diana, Rosalyn and Graham.

In 1953, a teacher who had been appointed to the Infant Department was unable, through ill-health, to take up the post, so I agreed to fill the gap for a month – a month which has extended to 25 years.

In 1966 I was persuaded by Mr Walpole to take a training course at Westminster College to become a Qualified Teacher, and I am eternally grateful to him for encouraging me to take this step.

I have quite lost count of how many children have come to me saying, “You taught my Mummy or Daddy” and although I threatened to retire when the first claimed that I had taught one of its Grandparents, it has happened – and now we have in the school Sean and Anita O’Keefe, grandchildren of Mr Ken Bishop, a member of my very first Junior class.

After the last was, I began my teaching career in the County at Lawn Upton Junior School, at Littlemore. This was a large school with about 400Juniors and big classes of 40 or so.

In February 1961, I applied for the headship of Sibford Gower Endowed School. So it was that after Easter our family came to live in the School House and I joined Mary Poulton and Barbara Skipper (now Crabtree) at the. school. Straight away one could feel the friendly family atmosphere and good order left by my predecessor, Bob Penny.

I was exceedingly fortunate because I had missed all the disruption and difficulty during the work on the improvements that had just been completed. I was I working in modern conditions in a school founded in 1625. One of the previous Headmasters had been a Yeoman named Huntley, who evidently found education unprofitable and helped to found Huntley and Palmers Biscuit Factory at Reading.

I stayed at the village school for ten happy years and during that time there were very few changes of staff, but I am grateful to my past colleagues, Pam Perrett, Andrew and Sandra Rolls, Sheila Kinnish and, of course, Joan Shields who started to help out temporarily and is still in harness.

One of the features of life in the Village School during these years was the stream of visitors from all parts of this country – and indeed the world. I think it made a pleasant drive from Oxford!

I left Sibford to move to a bigger school, Harriers Ground, in Banbury. There I have tried to build up the same ethos that made Sibford School such a happy place.

There are many interesting and curious buildings in our two villages, and we hope to publish occasional articles about some of them, houses perhaps that we pass every day but scarcely notice. We begin in Sibford Ferris.

The Manor House is a “listed building”, ie one of special architectural or historical interest. It is, in fact, an old building enclosing another, older, building. Only at one corner at the back is the oldest part visible from outside; a small section of wall and a stone mullioned window, part of the original 16th century Manor House, built probably in the reign of Elizabeth I, on the site of still earlier timber Manor Houses, themselves dating from around 1100. So, for some six centuries, this area of Sibford Ferris was the focal point for the administration of justice and for the reception of eminent visitors.

It was in the first half of the 18th century that the building was transformed by the new owners, the Walfords. The ancient front and sides were cladded with finely cut masonry, large sash windows were added and, inside and out, the house was given the Queen Anne fashion that we see today.

In 1842 it was purchased from the Walford family by a Quaker Trust and the Friends School was founded. Many additions and alterations have since been made to keep pace with the growth and changing circumstances of the School, but the facade remains, and must continue to remain, unaltered since the reign of Queen Anne.

At the recent Gower Annual Parish Meeting, villagers expressed their concern at the general level of tidiness in the village, and special mention was made of certain blackspots. These comments strongly endorsed the views held by the Parish Council for some time, that some villagers were not helping to maintain and preserve the overall attractiveness of our village.

Can we, therefore, ask you all to stand back and look afresh at your own patch. Ignore the familiarity of the surroundings and see what sort of view you present to your neighbours and visitors.

Comment was also made on the dumping of unwanted garden and building rubbish along the highway or on the verges. Please do not let us have any more reports of this untidy habit.

A tidier, litter free village will be of greater enjoyment to everyone, villagers and visitors alike.