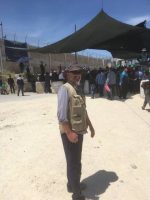 Michael Goodwin, former Head of Sibford Quaker School, will be speaking about his recent visit to Israel and the Occupied Palestinian Territory.

All are welcome – no booking required!

Michael served for three months from April to June with EAPPI (Ecumenical Accompaniment Programme for Palestine and Israel) and will provide some background to the programme and the current conflict, share some of his experiences and answer questions. During his time there he met with the British Consul, talked to Israeli peace activists, visited Bedouin communities, attended a military court and worked alongside the United Nations to monitor checkpoint crossings through the “separation barrier”. He accompanied children to school in the Old City of Jerusalem to provide a protective presence against military harassment and was also able to travel extensively throughout Israel and the West Bank. He observed the impact of the Occupation on both Israelis and Palestinians, and met with inspiring organisations from both communities working for justice and peace.

Since his return to the UK, both the United Nations and the European Union have issued strong statements asking that we join with “others in the international community in calling on Israel to halt plans to demolish (houses and other structures)…and to implement fair planning policies that allow Palestinians the ability to meet their housing and development needs, in line with its obligations as an occupying power”. Michael was particularly troubled to witness several such house demolitions and will tell the stories of some of the people affected. He will explore what we might do to bring about a just and lasting peace, underpinned by the rule of international human rights law and how we might help bring about an end to an Occupation that has lasted for over fifty years.