In 1839, a committee representing the Society of Friends in Berkshire, Oxfordshire, Buckinghamshire and Northamptonshire was formed to seek premises for a school, “to afford,” as an old deed puts it, “a plain, useful, guarded, religious and moral education with board, lodging and clothing to children, both male and female.”  The house they finally chose was the “Great House,” as it was locally known at Sibford Ferris, built by Thomas Walford in 1666, in the reign of Charles II.  The front part of the house, on either side of the big front door, is to-day practically as it was in 1666 (the year of the fire of London), its beautifully-cut masonry unmarred by the passage of three centuries. 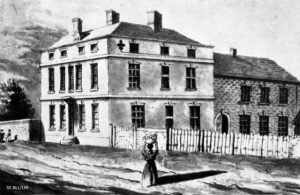 At the rear were barns and a farmyard when the Friends bought it in 1842.    When the school was opened the children travelled to Sibford over long distances, on highways roughly repaired with chunks of stone as big as a man’s head, in jolting stage-coaches and slow carrier’s carts (four carriers ran between Sibford and Banbury).   In its first year, the Friends’ School had 26 boys and 22 girls on its books (it now has 220, about equally divided between children of Friends and non-Friends).  The school was lit by candles. The girls helped with household duties. The boys worked part-time on the 25-acre farm. With so much labour done by the children, the fees could be correspondingly reduced: they ranged from £6 to £16 a year, according to the parents’ means. The children went home not more often than once a year. The school grew its own corn, which was carted to Temple Mill to be ground.

Later the agricultural bias was dropped and, with the second head-master, Mr. Robert Oddie, in 1880 came a stronger emphasis on games – football, cricket, tennis – and even a measure of co-education, which was far ahead of its time.  Latin, French, woodwork and drawing were intro­duced and even music which had been regarded as frivolous by earlier Quakers.