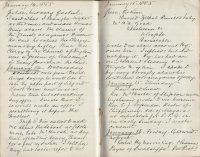 Received note from David Ainge saying he would like to take the upper part of Sibford Heath Farm now or at a future time but not making any offer. I wrote that if he would make an offer I would bring it before the Trustees.

Miss S. Dix called to ask me about the School at Littlemore, late Mr Hurst’s, as they think of sending Henry Thame for a few months. I told her they had better refer to Mr Green, the Vicar.

Mr Harold Goad, upholsterer etc, 4 Crop Street, Barnstaple wrote to me about account Harry owes him. I replied, but did not pay it. Harry has had an iron bedstead and bedding and a tricycle etc of him. I spoke to Harry very strongly about his continued extravagance and folly.