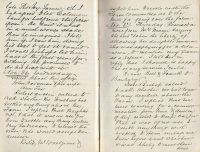 Received a note from Mrs Mann saying she had “taken the liberty” of allowing her daughter Emma, who was applying for a situation, to mention my name as a referee. I told her in reply that I should be happy to be of any service I could.

Drove Bell and Frank to Banbury.

Jesse Bishop called to ask whether we had come to any decision about the Farm. I replied that we were waiting for a communication from him and Austin if they wished to keep on, for that it was no use to decide anything with respect to them unless we knew before hand whether it was likely to meet their views.

Charles Barnes called and said the coals had been distributed in a very satisfactory manner by Harris of Hook Norton. I settled with him for superintendence etc. He said there were some grumblers at Burdrop who were dissatisfied at having to wheel a few yards the coals given to them. I told him to refer all grumblers to me and tell them that if they made rude remarks in his presence to tell them that he took it for granted that they wished them to come to my ears.