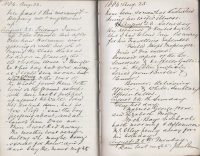 Rain last night. John Bonner and his wife came this morning to take Sally Green before Mr Norris with the view to take her to Littlemore. She resisted so much that he had to put the “straight jacket” on her. He then got her up into a cart and took her away. He came to me once or twice, but I told him I had better not go in as she was always worse with her best friends when her insane fits were on her.

Once the straight waistcoat was on she was quiet enough – so Bonner told me afterwards. Mr Norris signed the warrant without any difficulty. When they arrived at Littlemore, Sally curtsied to the doctors and attendants and soon made herself at home.