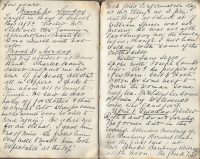 Visited Richard and Edward Scruby. The former died in the evening.

Attended meeting of the Banbury Clerical Club for the first time – at Mr Back’s Banbury Vicarage at 12 noon. The Greek Text read and discussed was Galatians V 16 etc – “the works of the flesh.”

“Inis Indicabit?” was the other subject – alluding to the present position of our Bishop of Oxford. The Council of Queen’s Bench has issued a Mandamus calling on him to appoint a commission etc under Church Discipline Act of 1841 to enquire into the charges of illegal ritualism brought against Canon Carter  Rector of Clewer by Dr Julius, a parishioner, supported by the funds of the “Church Association”. The Bishop appeared before the Court of Queen’s Bench in Person – and has now appealed to the Court of Appeal over which his brother-in-law Lord Coleridge presides. A vote of sympathy with the Bishop or of thanks to him for what he has done was proposed – but not formally – and nothing definite was done. There were 18 members present.

I called at Mr Henderson’s Christ Church Vicarage after the meeting – but both Mr and Mrs H were at Church. I saw Mrs Ford and “Miss Mary”.