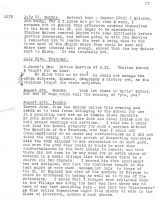 Tarver Jnr. from the Colony called this evening and asked me to lend forms belonging to the School for use in a preaching tent set up in Temple Close opposite Mr. John Enoch’s where Miss Cobb and other ladies are to hold prayer meetings and services. I told him I could not lend the School property for such a purpose without the sanction of the Trustees, and that I could not conscien­tiously do so under any circumstances as I did not think the coming into the Parish of dissenting preachers, like the body alluded to, was calculated to do much good, and even the good they could do would be more than counterbalanced by the harm likely to result; and that there did not seem to be any need for an extra place of worship in a small village like this where there is a church and two chapels. I warned that excitement was not religion and that the doctrines taught in the tent might be very much opposed not only to those of the Church of England but also of the Society of Friends, to which he professed to belong, as well as to those of the Methodists. I added that I thought each religious body in the Village was doing its best and that there was not need of any tent preaching here, and that the “Missioners” as they called themselves might find plenty of work in the slums of Liverpool, London and such places.