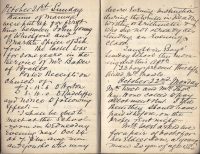 Mrs West and Mrs Thomas Henry Hone called to pay allotment rent. I told them they should have paid it before, on the proper rent night. Mrs West asked me for a pair of boots for her eldest son, a young man 20 years of age who is gone to work for Daniel Sabin at the Mill. I told her I would ask the feoffees.

Miss Maria Dix called. She said her sister had not commenced night school yet but intended to do so shortly and could take 8 boys. I told her I should prefer to have the men at the school and get the boys taught elsewhere. I told her also that all should pay at least their share of expenses.

Took tea with the Misses Dix this evening. Mr and Mrs and Miss A Smith of Brailes and Mr and Mrs Cooper were there. Mrs Stevens came later in evening. Rosa did not, being unwell.

Sent P Webb £1.4 to pay his doctor’s bill for attendance on his wife.