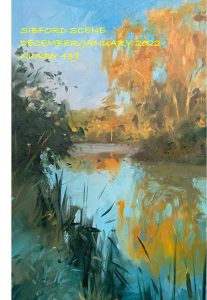 A white frost tops the stone walls
and the still solid posts of the abandoned fence line
that stretches up to the ancient track of Ditchedge Lane,
look as if crystal ice upon them might bond to any touch.
The perspective of the field we are in,
points in neat rows towards silhouettes of bare oaks,
tho’ in part, still gloriously sky-cloaked by the lifting misty sky,
and to the left, a terrace of twisted small trees,
mostly hawthorn, impatient for first leaf and nesting birds,
or blackthorn, desperate to bloom,
while myriad clumps of frost-spiked grass
pay homage to those fan spread hands of clouds
with their bird-breast plumage and soft angelic down
that hover above the shy pink, grey dawn gold, of sun rising
into a blue sky, that promises brightness to a winter’s day
and perhaps a lifting of some heart, in Sibford Gower.

This poem was inspired by the January photograph on the 2022 Sibfords’ Calendar. Buy the calendar for £6 at The Wykham Arms, the village shop, or church events.

Recent extracts on the Sibford Website from the Stevens Diaries have covered the year 1884, and have included comment about the Sibford Brass Band which was founded in June 1884 by the diarist, Reverend Edward T Stevens. Subscriptions from the band members and donations from the wider public were collected. Mr Henry Norris of Swalcliffe Park said he would donate a sovereign – but suggested that a rule should be made to the effect that there should be no performance of the Band on Good Fridays, as that was done at Shutford, much to the annoyance of the inhabitants!

The band members, mostly young agricultural labourers, subscribed half-a-crown a week towards the instruments which were supplied by Messrs Besson. Mr J Griffin was the first Bandmaster, Thomas Lamb the Treasurer and R Gaydon the Secretary. The first instruments arrived late in 1884 and the first public performance was in February 1885. By the end of 1885 the members’ subscriptions amounted to £59 9s 6d, with further donations of £19 9s 7d. The instruments had cost £50 17 6d and, after payment of other expenses, a balance of £12 8s 0d remained which was put towards the uniforms.

The original uniforms were made of heavy warm cloth with a high-necked tunic-style jacket which was decorated with braid. This style of uniform had a small matching ‘kepi’ cap. By 1920 the uniform had been updated and the bandsmen wore a collar and tie under a lapelled jacket. The cap was replaced with a smart peaked cap.

By 1893 the conductor was John West and by 1903 J Scruby had taken the conductor’s baton. The band used to practise in the Band Room above the Old Post Office and some of the uniforms were found there. When the Band disbanded many of the instruments were retained by the players but the side drums were loaned to The Shipston Town Band. We were fortunate to be able to display the uniform and some instruments, including the original bass drum and euphonium at the exhibition in 2018 celebrating the 100th anniversary of the end of WWI.

I hope you enjoy reading these snippets of life in the Sibfords as much as I enjoy researching and writing them. Wishing all readers, a very Happy Christmas with a great year to come reflecting on Sibford’s history. 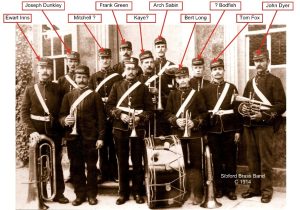