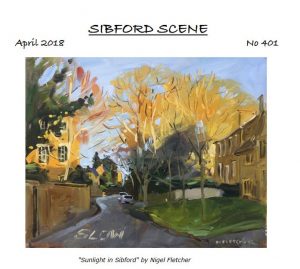 Communication in the Sibfords

Writing in 1937 Joshua Lamb records: ‘The isolation of our villages was almost as pronounced in the middle of the 19th century as it had been during the preceding hundred years. The electric telegraph and railways were in their infancy, bicycles were as yet unknown and the daily paper was to be had only in the towns and large villages. Almost the only outside news we obtained was through the medium of “Bell’s Weekly Messenger” which usually devoted one page to general information. This paper often served two or three households and it was our duty when very young to pass our father’s copy on to a neighbouring farmer.’

Telegraph wires started to appear in the Sibfords in the 1890’s and the first telegraph was received in the village in 1896. It detailed the new postal arrangements for Sibford:-

Banbury, 27th November 1896 Telegraph to Miss Inns, Sibford Gower from 1 st Dec your bags will be conveyed by mail cart instead of Rural Postman and the following changes will be made: The mail cart will be due at you office at 7.05am. The present allowance for delivery to Gallows Hill @ 2/- will cease. The following duties will have to be provided for and allowances for some will commence:

Communication via telephone, newspapers, television, computer, email and the internet have developed at a rapid pace. It is no longer possible to send a telegram but by the end of 2018 those villagers who wish to, should be able to access Superfast Broadband and the new phone mast at the top of Pound Lane should improve the mobile phone signal for certain providers. These improved communications offer the opportunity to work from home for many villagers. Whoever could have imagined this instant access to global events and what of the next hundred years?