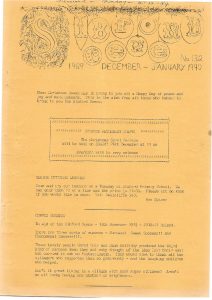 Old memories of Sibford in 1989

A Small Hamlet South of the Cross has had no mention as yet. “Enocks Colony” built by a gentleman called Enock in the years of 1839-40. These few houses have produced many well known names born within their walls. Families as Inns, Payne, Barnes, Spicer, Dunkley, Hall and Dyers. They spent many years of their young lives playing together in their own paddocks. Later they slowly worked themselves up into the village amongst us and they serve the community in many professional ways now. A little further down the same road a farm stands on the sharp bend, namely Temple Mill. This has been the residence of a well known Sibford family, the Sabins, who were farmers in their own right and were always using their Mill for farmers around.

The Village Hall. This has not been mentioned in detail because most people know the history of this project which Leslie Bailey headed. Men and women and children spent hours working in the evenings on the site, without pay (no strikes, of course!) to give Leslie his ambition for the Hall. He forsaw a village hall for Sibford that gave him many happy memories while he was at the Quaker School, so that the citizens could use it for themselves.

Ferris and Gower. This heading is to tell you how we were able to support ourselves years ago by private business.

These do not include our long standing Religious buildings and their officers.

The Bakehouse, Sibford Ferris, was the place for many families on the Sabbath to take their Sunday lunch, to be cooked in the large oven – consisting of the Beef joints and Yorkshire puddings.

The Fish and Chip shop, open 6 days a week, in a cottage in Burdrop, by Mrs. West (our friend Len’s Mother) and now the house is owned by Mrs. Amy Poulton, which in those days belonged to Burdrop Farm, just above.

Characters of the Village. Two, ladies, Miss Annie Inns and Miss Carrie Dolman, spent many years walking to and from their work as teachers in the village schools at Epwell and Swalcliffe. They hardly missed a day and enjoyed the best of health.

Mr. Fred Inns, Postmaster, assisted by his daughter Winifred, spent most of his days when he became old in the Post Office and was called Father Christmas, because he had a very long white beard.

Mr. Lewis Poulton senior, from the age of 18 years, was very deaf owing to having an attack of Scarlet fever, but overcame this by using a copper hearing trumpet till his dying day, and it was buried with him. This did no harm to his life as he was on many committees in the villages and was, I believe, Chairman and also secretary to the Friendly Society, which did a lot of work for people. His son, William, was a regular Church goer but had a habit of enjoying his own voice, as he managed to be at least a word behind the congregation and Vicar, and used his strong voice for the Amen.

I have not mentioned Frank Lacelles and Theodor Lamb as they are well known in their own biographies.

The Women’s Institute is one of the oldest organisations in the village and it has had many well known Sibford names as presidents along the line. They spent many happy hours in the evenings producing Plays and Sketches and were successful once or twice to get to the Finals at Oxford.

The choir of ladies had some enjoyable evenings as well. The up to date group is strong but I am afraid I cannot comment on this too much.

What a very hectic time was had with young and old in their own homes and going out Carol singing many eveninqs in Christmas week.

The outstanding event was the Farmers Ball, held in the Village Hall on New Year’s night. This was a dance for farmers and their friends from far and wide, by invitation, and evening clothes were worn by everyone!! A special band was in attendance from Banbury.

The following two days was the Parish Tea that was held in the Hall which consisted of a tea for the adults and dancing – the following evening was for the young ones to enjoy – a meal and games, and all food was given. The dancing and games ended at 9 p.m. and continued for the grown ups til midnight.

This small extension to The Sibford Scene during this year was a challenge to everyone but it is to be hoped that it has interested the new friends amongst us. Thank you all for the very kind messages received by phone and letter that they have enjoyed the articles. The Sibford Scene has travelled far – North, South, East and West of England and one or two have reached Canada and America.

A memory that lingers is a little girl, when 8½ years old, coming home from her school for half term, will always be in her mind for ever. Popping out of her parents home and going up towards the Church – the picture in front of her was of Beautiful Fresh Green Elm Trees and Fir Trees, along the side of the quiet road up to the village school, and further, with a beautiful blue sky above; this picture in her mind has never been lost.

The moral of this will perhaps make many agree. The speed of life of today is enormous but in the middle of the County this little village of SIBFORD tries to keep its Peace and Kindness to everyone.