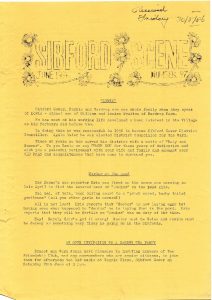 Murder at the pond

The Scene’s ace reporter eric was first on the scene one morning in late April to find the severed head of “Jemima” on the pond side.

She had, of late, been paying court to a “prick eared, bushy tailed gentleman” (all of you other girls be warned!)

Hey! Surely Eric’s got it wrong. Hector must be Helen and Jemima must be Jeremy or something very fishy is going on in the Sibfords.

Fresh from its recent T.V. debut (now to be screened on July 6th – ‘Home on Sunday’), the Friends meeting house hosted a wedding on May 17th when Mary White (daughter of Brian and Maureen, who many villagers will know) married Niall Hudson after the time honoured manner of Quakers. Visitors to the meeting house and burial ground often ask me about Quaker customs and sometimes express surprise that allottments are allowed (even welcomed) in the burial ground. They also comment on the uniform (size smallness) of the headstones. This latter arises from Friends belief, since their beginning in the 17th century, in the equality of all men and women irrespective of rank and honours or occupation, wealth and class. Thus you will find ploughmen, merchant bankers, historians and farm workers all alongside with minimal epitaphs.

If you have something nice to say about someone – how much better to do it while he or she is alive!

As for the weddings – they are real DIY affairs, shocked by the power consciousness of many 17th century priests, the founders of the Society of Friends rejected priestly authority and they opposed the swearing of oaths – since this implied double standards of truth. Having considered that everyone could have a direct experience of God, without an intermediary, they decided that it was quite valid for a man and woman to declare, during a meeting for worship, their intention to live together in a state of Christian marriage. An accepted form of words for the VOWS made has evolved and all those present at the wedding sign the certificate of marriage. When state legislation, standardising marriage procedures throughout Britain was introduced, Quakers were allowed to retain their customary procedures although, of course, a state wedding certificate has also to be completed and one Friend within the meeting is vested with the authority for this.

Many folk today, deeply concerned at the decline of religious faith of any sort and at the increased rise in greed, materialism, violence and just plain confusion over morality (in its widest sense), are desperately seeking for something that will provide a central pivot to their lives. The cry is heard, why not give the wealth of religion available in this country another chance?

There are many books on Quakerism and further information is available from Q.H.S. (enquiries), Friends House, Euston Road, London N.W.1. 2BJ.