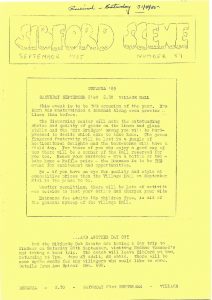 What's in a name

When I was at school, the common names were not Bishop, Hall, Haines, Lamb, Lines, Manning and Poulton, but Archer, Bridger, Pargetter, Wagstaffe, Warrener and Woodward. Take any trade or occupation and you will find surnames. Thatcher, Tyler, Slater, Mason, Joiner, Carpenter, Sawyer, the list is almost endless.

Over the last sixteen months, the slab bridge over the Sib at the bottom of Oddie’s field, has had four sets of handrails. The first was a well-worn, highly polished, rounded and chamfered piece of pitchpine, which was once part of a bench from the Meeting House. The next was a piece of rough-sawn 4×2 with the hope that it might yield splinters if roughly handled. Then there was the rustic effect in intertwined willow and ash, and now, I hope still, one of white washed plank. All these were fixed by stout nails made by Naylors.

Nailing was at one time a domestic industry in the Black Country. A length of iron bar was held in the middle by tongs and heated in a forge. When red hot each of the two ends was tapped diagonally to form the ‘head’. Each piece was then cut in the middle and, while still hot and malleable, each cut end was flattened by hammer blows to form a point.

Nails were sold by weight, but were known by the number of nails in the pound weight, not by their length. A ‘penny’ nail 240 to the lb, a ‘tuppenny’ nail 120 to the lb, a ‘threepenny’ nail 80 to the lb., and so on up to a ‘twelvepenny’ nail (not a shilling nail) after which they became spikes and you had to get those from the Blacksmith.

These nails were, of course, flat, somewhat like a clout, and unlike the modern wire nails.

I was reminded of this old terminology, the way I used to buy nails, while reading an American farming journal last month. In an article on fencing, a New England farmer, maintaining the advantages of wooden over steel or concrete posts, wrote of 3d and 8d nails.

It seems strange that this nomenclature should have persisted so long in a country which long ago divorced itself from our duodecimal currency and imperial measures.

Is it too much to hope that the fourpenny nails will hold the present planks a tenth of that time?

Following last issue’s piece on shops in Sibford, Mrs Mabel Dunkley has added to the list of sweet shops with memories of one in Burdrop near where Miss LeMare now lives.