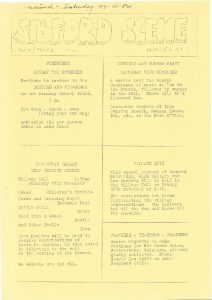 We appear to be a favoured village for young people to come to. A couple of weeks ago yet another team landed in the village and started selling their wares. This time they were from WORK (CREATION) CONCERN of Nottingham. Polite, hesitant, even shy, they insist on saying their well-rehearsed piece whilst holding up their ‘identity card’. The one who called on me had a much-thumbed plastic-covered card with a lot of large print on it and a photograph of two people, one the bearer, and the other presumably his Social Worker ?, and started with the words, “Hello, I’m Paul…..” I bought an ironing board cover, mainly because I needed one and the price seemed about right. It looks of good size and quality, says Made in England on the wrapping and carries a money back guarantee, not from the manufacturers, I may add, but from the Work (Creation) Concern in Nottingham.

The time before this we were visited by a large team from Coventry, equally polite, (but definitely not shy) until I refused their offerings (engraved, framed pictures at £5 a time) and started asking questions and was then treated to a rather nasty mouthful. On that occasion, mid-August, I seem to remember, I telephoned Banbury Police, who told me they were aware of the goings-on, and yes, these people were a nuisance, but NO they could not do anything except advise people not to buy any thing.

What interests me and, I am sure, lots of other people in the village who have been bothered by these people recently, is why pick on us? Are we in the Sibfords ‘on the map’ so to speak, or is it that we are nicely off the beaten track?

Work (Creation) Concern is NOT a Government sponsored organisation. It is, in fact, a private concern, employing door-to-door salesmen. If there are any complaints about these people or their goods, the Manpower Services in Nottingham would appreciate it if you would write to them direct: The Manager, Job Centre, 14, Milton Street, Nottingham. NG1 3GL.