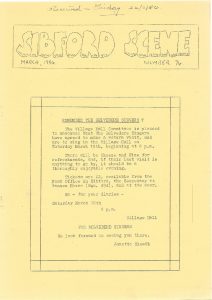 It is regretted that, due to lack of support, the above Circle has ceased to function as such, although waste paper will still be collected and the money from it donated to the Friendship Club.

The Committee decided that the balance of money raised (£29.59) should be donated to the Sibford Scene, and this has been done.

Sincere thanks to the few people that did help, including those who have saved waste paper.

*****We are very grateful for this donation. Many thanks to those who worked so hard to raise the money. Ed.

In response to the suggestion that readers might have some tales to tell, Frank Rollett has bravely set the ball rolling. Further contributions gratefully received.

“In the 1890s professional golf was in embryo, being gradually brought to public notice by three Scotsmen, historically known as the great triumvirate , James Braid, J.H.Taylor, and Harry Vardon .

In 1930, to celebrate the opening of a new men’s shop in Birmingham city centre, the elderly Vardon was employed to give short lessons in the basement. Having just taken up the game, I indulged, feeling embarrassed at my own rawness and that such an old and great sportsman had need to do this. I wonder how many are left who ever enjoyed a Vardon lesson?”