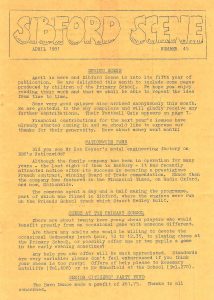 On Tuesday the 9th of March Mr Hayes came to the Village school to show some slides of the earthquake in Italy.

Mr Hayes took two caravans over to Italy for the homeless. This is some of the work the children did after he had gone.

Houses falling, dust flying,
Mothers., screaming, children crying.
Will it ever stop, its carrying on for hours but its only seconds..
It’s over, everyone is crying thinking of their lost ones.;
Houses half standing in the countryside,
A staircase winding up where a doll is hanging.
A wooden door of a church left standing with organ pipes falling on top,
Rubble of houses,
People left homeless.

E for Everyone busy in the streets.
A for Absolute silence before the earthquake.
R for Rumble of a slight tremor.
T for Terrified community as the earthquake erupts.
H for Houses crumbling.
Q for the Quiet streets desolate and deserted.
U for an Uncanny silence.
A for All the people searching for lost relatives.
K for people Kneeling down praying it will stop.
E for Everybody getting organized to start building houses.

Suddenly with no warning the earth starts to tremble.
Beneath your feet the earth is trembling, crumbling away.
It moves so much you can’t move, you feel paralysed, stuck to the ground.
You hear sound around yourself as though the whole earth was gradually cracking up.
It’s like standing in a boat on the sea.
The whole area around you is falling to bits.

It was late afternoon and people were coming home.

The earth starts trembling all around.
Ninety seconds of destruction.
People lie helpless under the rubble.
Houses crumble and fall to the ground.
The people who are left looking for belongings amongst the rubble.
Thousands are homeless.

A sudden silence,
Then a rumble and a crash.

People shout and start to run.
Scared faces,
Houses falling,
People digging for families,.
Suddenly it stops dead.
All that is left is the church and the organ pipes.

After the terrible earthquake in Italy
Everything is demolished, shattered glass from windows,
Buildings ready to crumble at the slightest movement.
Lost toys hanging from stairs.
Caravans standing on the muddy road.
The church damaged, broken organ pipes on top of it.
Everything is destroyed.
At night the people sleep outside in the bitter cold.

Above, we’ve copied out one or two items that may be of historical interest from this edition. To see the whole edition, click on the front-page image to download it as a pdf.

It will take a while, but we’re gradually building up this archive of complete copies of all editions of the Sibford Scene since its inception in 1977. Yet to be uploaded are editions between 1994 and 2015.