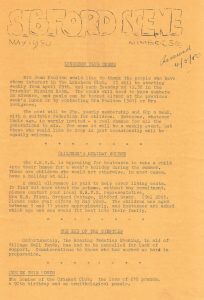 The end of the Twenties

Unfortunately, the Roaring Twenties Evening, in aid of Village Hall funds, has had to be cancelled for lack of support. Commiserations to those who had worked so hard in preparation.

The demise of a village cricket club

For 104 years Sibford has had a cricket pitch in the field behind the Village Hall. Alas, no more. We have not been favoured with permission to use the pitch for future seasons.

Many of the old Sibfordians in the village can tell of games won, lost, argued over. Captains have been criticised, praised, condemned according to results at the end season. Wives, girl-friends, and mothers have all played their part by preparing teas, scoring and seeing their men turned out in brilliant whites. They have enjoyed the opportunity to meet friends from.nearby villages.

Friday night and Saturday morning have often left the household without its menfolk while they labour to prepare a good wicket for the day‘s match. Sibford was well known in the district for its good wicket, hospitality and surrounding views.

The original wicket was laid and drained by my great-grand-father and others in 1876 when it was farmed by a Mr Ainge. Three generations of Poultons followed in the farm and actively participated in the use of the field for sporting activities, and cricket in particular. When the farm was last sold, Mr Shaw bought the field, built himself a bungalow, but allowed the use of the field as before.

I am proud of the fact that we as a family have been associated with the cricket club since that time. With four sons of my own, all keenly interested in cricket, I am naturally disappointed that we shall no longer have a cricket pitch for their enjoyment. Several other families have long association with the cricket club and have worked hard in lean times to keep it going. It is sad to see these activities go after such a long time: we have already lost the Bowling Green, now the cricket pitch. Perhaps they will want.to fill in the village pond next to be used as a car park.